The Birth of My Sinister, Glowing-Eyed Son Changed My Life

I have to admit that before the birth of my son, Daniel, I secretly dreaded becoming a father. Not just because of the nightmares I had about seven-headed beasts and oceans turning to blood, or that ultrasound where it looked like he had claws. I was afraid of the responsibility, the financial burden and most of all the knowledge that as a parent I'd be entering a whole new stage of my life, one in which the carefree days of my youth would be officially over.

But all those fears vanished the moment Daniel was born. After eighteen hours of labor, a c-section and a brief fight where he tried to strangle one of the doctors with his umbilical cord, I held my son in my arms for the first time. As I looked into his wide, inquisitive, glowing eyes, I knew that my life had changed forever.

It's hard to describe, especially to a non-parent, the flood of emotions you feel when you first see the tiny human being you've helped create. You suddenly realize how fragile and miraculous life is, and how lucky you are to be alive yourself. Driving Daniel and my wife home from the hospital, I was extra careful. When a swarm of locusts surrounded our car, I didn't speed up and turn on the wipers but slowed down and admired the beautiful insects. Eventually, a police officer pulled me over for doing 25 on the freeway, but as soon as he looked in Daniel's eyes, he tore up the ticket, knelt on the ground and vowed eternal servitude to my son. Clearly, he must have been a dad himself.

The next few months weren't exactly a walk in the park. I learned the hard way that no amount of books, magazine articles or stand-up comedy can prepare you for the immense responsibility of caring for a child. When I wasn't changing Daniel's diapers or spending sleepless nights trying to soothe his crying, I was agonizing over his health - I must have called the doctor every time he coughed, sweated or projectile vomited onto the ceiling. But during those months I learned true selflessness. If I had been walking down the street with my son and someone had tried to harm him, I would have gladly given my life to stop them - assuming the pack of dogs that follows Daniel whenever he leaves the house didn't take care of them first. 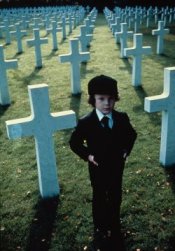 My wife, Susan, feels the same way. Raising Daniel has been even tougher on her, especially that time she had to get stitches after trying to breastfeed him, but she agrees that our son is the best thing that's ever happened to us. Since his birth, we've grown even closer, and, believe it or not, our sex life has improved, too. Some nights, like planetary alignments and the September equinox, we make love for hours while having visions of mysterious hooded figures and fiery hellscapes where giant reptiles copulate endlessly beneath a blood-red sky.

Daniel is six years old now. He can still be a handful at times, like when he stages those graphic recreations of the Spanish Inquisition with his Star Wars action figures, but the countless ways he's enriched my life more than make up for it. The other day, for instance, he said something that would have made even my younger, more cynical self misty-eyed. When I asked him what he wanted to be when he grew up, he smiled and said "I want to be president, daddy, so I can plunge the world into a darkness it has never known."

I just laughed and patted him on the shoulder. "You already have changed the world, son," I replied. Because, for me at least, he has.