"I choose for my state, and for my family, more freedom to progress all the way around so that Alaska may progress...I will not seek reelection as governor."

Sarah Palin resigned from her Alaska governor's job with an eight minute long basketball metaphor delivered to a raft of loudly quacking ducks. It was a fitting end to a grotesque political career that will stumble on for a while like a mortally wounded moose. Her stated reasons for stepping down included everything from "frivolous" ethics charges to Something Awful making fun of her Down syndrome son.

The purpose of this article is to apologize to Sarah Palin for that last part, but first I feel that a bit of history is in order. 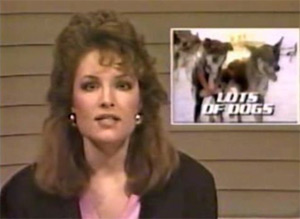 Palin became a household name in 2008, when a malignant meat sack full of liquid Viagra and barely-sublimated hostility towards women and Asians chose her as its running mate. Loquacious former beauty queen and dog counter Sarah, along with laconic husband Todd, boarded the flooded submarine of the McCain campaign just as it was sinking to crush depth.

The situation was dire for five-time jet-crasher John McCain. Eight years of Bush shitting away everything true and beautiful in America had left the electorate ready to puke blood at the thought of another Republican President.

It didn't help matters that McCain was a ghost-faced, lizard-tongued monster committed to grade school level political theories (don't give up until we win!) trying to best a brown angel talking about destiny and casually reading Fareed Zakaria. Obama even looked suave exiting vehicles and not at all like Dracula popping out of his casket at the funhouse.

That Obama fella was with the times. The kids loved him. He knew about things like blogs and Ludacrises. The old man sharing a bucket list with Lindsey Graham and Joe Lieberman was in real trouble.

This sense of futility in the face of looming defeat partly explains the conservative base's celebration when McCain made his cynical play for Clinton voters. The base wasn't even really with McCain until he picked Palin.They never liked his sissy stance on not burning terrorist scrotums and not punching Russ Feingold in his fucking face on sight. Palin was an appeal to the base's blood-drenched id, aching for release in the womb of a holy-rolling special angel mom unwilling to support reproductive rights or equal pay for women.

The base believed that Palin would step in for an ailing McCain and bring about the culmination of the Bush Doctrine to transform America into a smoggy Wal Mart parking lot full of ant-covered abandoned snowflake fetuses. They accepted the premise that years of facing Putin's rearing head up in Alaska had trained Palin in the ways of international politics and a lot of prayer had prepared her to confront domestic issues like 'conomies and 'vironments. 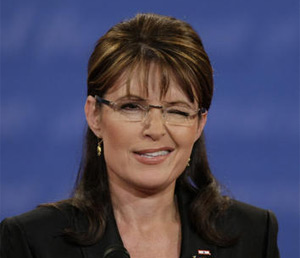 A series of increasingly disastrous interviews set the stage for conflict with the press. Palin crumbled in the face of impossible gotcha media questions like, "What do you read?" (nothing) and "What is a Vice President supposed to do?" (everything).

McCain's campaign staff tried to spin Palin's flabbergasting stupidity. They claimed that a vengeful Katie Couric was just trying to gin up ratings by asking a fucking lousy trick question like, "How are you this morning?"

While Palin was running screaming at the bayonet line she was simultaneously caught in a crossfire of miniature scandals. She forced her pregnant teenage daughter to get engaged to a lunk-headed hockey star with a MySpace page stating directly that he did not want to be a father. An ethics investigation back in Alaska was painting her as a woman who abused her power as governor to get even with enemies. There were even conduct questions about her time as the hillbilly-fascist mayor of Wasilla: Alaska's meth and rape capital.

Brutalized by eight years of Bush prosperity, the American people experienced a fit of sanity and elected the center-right corporatist and his goofball sidekick instead of the warmongering economic neophyte and the winking, know-nothing, hockey mom hate shit he took on the face of America. The outcome wasn't even close. Indiana voted for Obama and voting Democratic in presidential elections there is actually a fineable offense.

Post-election leaks and dueling recriminations painted a picture of McCain's advisers as reluctant, sometimes hostile, participants in the Sarah Palin campaign to be elected vice president. Her family drama escalated and her approval rating in Alaska took a serious hit. 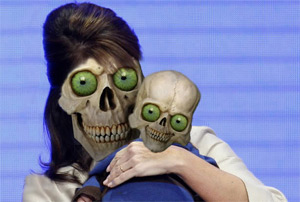 Sarah Palin, I would like to personally take this opportunity to apologize for Something Awful's role in your decision to step down. Over the years we have produced millions of words of left-wing hatred for innocent teenage daughters and children with disabilities. We hired a hockey-playing ne'er do well claiming to be Trig's father to write articles in which he describes crossing the sex line with most of your family. I am so sorry for letting that monster have a column here.

I would also like to apologize for the dozens of Photoshopped pictures of you and Trig on our forums. I know that of all of our hate content, these upset you in particular. You aren't the first governor to resign because of a mean Photoshop and I am certain you will not be the the last. I hope you can find it in your Christian heart to forgive us for making light of Trig's disability. I completely agree with what you said in your speech today: The world needs more Trigs.

You hear that, pregnant women of the world? The bar is officially open.