The Diary of Andy Frankle

Tuesday, September 2nd. I really risked my safety today. I needed a meatball sub--badly. I had to get one. It was stupid, especially since the game is to be released in less than a week, but the hardships of life need covered every great once in awhile. I spent a few hours piecing together an outfit. I think I blended in perfectly. I went during lunch hour when all the men were in business suits. It is strange to see the world continuing without me. I felt like Luigi in the video game Luigi's Mansion, except I was the ghost, and everyone else was alive. Oh well, everything worked out fine. I got my $5 sub, but I added extra American cheese so they charged me an extra fifty cents. Luckily, an elderly woman gave me the change. See, there is kindness in the world. I told the cashier that I was getting it to go even though I wasn't and then I asked for a cup for water, but I filled it up with Orange Fanta instead. Desperate times call for lies. I felt so bad. My feelings changed quickly when I won a free cookie with my scrabble ticket. White Chocolate Chip Macadamia, is there really any other choice? Here is a pic of me eating the sub, the daylight was very bright. 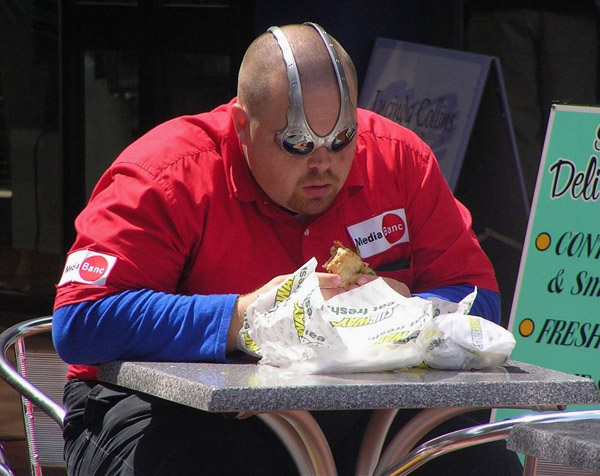 Wednesday, September 3rd. Meatballs are still rolling in my tummy today. I feel great, but I've been going through a certain number of changes lately. Last night, I woke with a strange sensation. I got out of my bed and walked over to the poster of Vegeta. I have only thought of him as a friend and a hero. He has always been helpful whenever I've been in a bind, and yet, last night, I felt we shared a new connection. I stood on my tippy toes to be equal hight with the Saiyen. I looked deep into his 2D eyes while a spark was erupting in my heart. I leaned in close and we kissed. On the lips. When I pulled away, my lips stuck to the paper for a minute. I do not know if this was because of an eternal love or extremely chap lips. I thought about touching his pecs, but decided to sleep instead. I think I am developing into a man.

Thursday, September 4th. I read some Spore reviews today. It sounds as wonderful as I imagined. Not everything is good though, for this is another pizza-less week. Will Ben remember me? Will he remember my special pizza order with the side of hot wings, extra ranch? A tiny voice inside of my head is screaming for me to stop, to give up, to let myself die here. If not cheese and pepperoni, then what is the purpose of life? 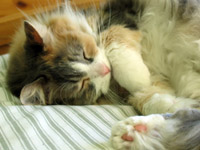 R.I.P. you noble beastFriday, September 5th. Terrible news. The cat found my hidden location last night. During my evening sob (they are becoming more and more frequent,) I heard a distinct rapping on the false pantry wall. At first, I believed it to be my own head, for God and my body are playing tricks on me, but soon I realized it was from outside. I tried to ignore it, but the noise continued for well over an hour. The tenants were curious as to what their cat was doing, but decided that a mouse must be around. When the owners left for work today, I went into motion. I opened the false door a crack only to see the cat sitting outside, waiting to be petted. It looked so cute perched beside me, as though it wanted to comfort my tears and be my friend. I quickly grabbed it up in my arms and snapped its neck. Nothing can expose me, especially since Spore is to be released tomorrow. I hope my sins can be overcome with the creatures I protect in the game.

Sunday, September 7th. I downloaded Spore last night. The fruit of my labor. It has been six weeks of hiding for the game, and I spent the majority of the day playing it. I am disappointed to say the least. Everything is boring, why would I enjoy creating a civilization when I am isolated from my own civilization? The creature creator was a joy because it allowed me to create beings not tormented with inperfections, but the rest of the game is a hard struggle, just like real life. It was awful. It's a wonder I haven't abandoned all my ideals, they seem so absurd and impractical now. Yet I cling to them because I still believe, in spite of everything, that Maxis is truly a good video game company at heart. It's utterly impossible for me to build my life on a foundation without The Sims.