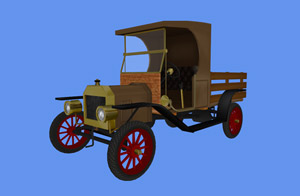 Fuck it. We had this car in our rendering software. We're pretty sure it came with the software. The headlights shoot some sort of nuclear destruction beam. There are, heh, bombs in the trunk or whatever. You can load it up with cargo and drive it to Mexico. Space Mexico. Look, we're not even going to pretend we're not doing crazy rails of cocaine with all this money. Every million dollars you give us just goes straight into booger sugar to melt another valve out of Chris Roberts' heart. At some point we thought you would catch on and stop buying these things, but you just refused to not buy them. So have fun with your space car or whatever. 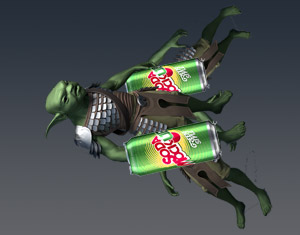 Hey, idiot. Want to spend your money on this garbage? We don't even know what it is. Some pop cans attached to a pile of goblin models from a cancelled reboot of Lands of Lore. Maybe? We were going to try to sell you all these different animals you could ride like horses and pigs in Lands of Lore and then we just said "screw it" because we could sell you anything as a spaceship, including horses and pigs. Why bother with another reboot Kickstarter? So join the, uh, whatever, is this a space game still? Whatever it is, get your Sodawolf Mark 2 thing. It has torpedoes. You can fly it inside a bigger ship and put cargo in the goblin. Give it a shot, dummy.

Buy ten of them with the money you were saving for your kids' college fund. These things are sure to go up in value. It'll all be a sound investment. The guy responsible for the Wing Commander movie is making this game. What could go wrong?