Christmas is right around the corner and Star Citizen is excited to help you get into the holiday spirit. We are offering you five new spacecraft for our upcoming title. Buy them for yourself. Buy them for friends. You can look at them in your space hangar in the hangar software which should be releasing very soon. Don't consider these ships DLC for a game that is not yet been released, consider them investments in your future of gaming enjoyment. 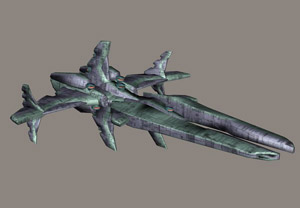 The AT-40 is a direct competitor of the RSI Shadow Rapier space starfighter. We originally weren't going to release this ship, because it looked a little dopey, but we released a tugboat last week and you guys bought almost 8,000 copies of it. This thing features turrets, missile pods, escape pods, romantic getaway pods and a huge room you can walk around inside of when you buy it. Act now and you can get some sort of special laser that shoots glowing purple balls or something. We haven't even thought it up, but we've got years before you force us to release our half-finished game to ward off Kickstarter lawsuits. I'm sure we'll come up with something good before then.