Maintaining Your Stealth Bomber On A Shoestring Budget

Things are going well. Maybe you got a new job, or you received a few gift cards for Christmas, or you finally decided to cut the cable tv cord and get all your shows and movies online. Now you have some disposable income in your pocket, and suddenly that stealth bomber you've always wanted is within your price range.

You splurge. Why not? You deserve it.

A few months go by, and you're a victim of the economic downturn. The price of peanut butter has gone up substantially. Going to the movie theater practically requires the extra expense of 3D glasses and D-Box. It's terrible.

Taking care of a stealth bomber can frazzle your nerves. Keep cool!Suddenly the cost of maintaining a stealth bomber is beyond the scope of your budget. Things seem dire, but don't do something impulsive like returning the bomber. With a little bit of work you can keep it for just pennies each day.

As you're undoubtedly aware, military grade jet fuel is pretty expensive. Topping off a tank costs somewhere around eighty thousand dollars, and you're lucky if that lasts for more than an afternoon of cruising through above town.

Forget about fuel entirely. With a relatively cheap conversion kit consisting of bicycle pedals and a graduating series of gears, you can bypass the thrusters and simply pedal really hard to get around on the landing wheels.

Staying on the ground has the added benefit of giving people a much better view of your bomber. Sure, your wingspan might make it difficult to take some corners if you live in a city, but if you cause any property damage you can always activate the stealth systems and make a relatively quick escape.

Your stealth bomber's crew presents a tough decision. Should you choose to keep them around, you might want to consider ditching their current meal plan and planting a cabbage garden. You'd be amazed at how long a person can survive on cabbage and water from the garden hose.

Let's say you decide to get rid of your crew. Manning a stealth fighter is all these guys know. They're going to be very reluctant to leave.

I suggest that you take the aforementioned garden hose and run it through a slight opening in one of the bomber's windows, then fully open another window on the opposite side of the cockpit. Wait until the nest of crewmen has fallen asleep, then turn on the hose at full blast. In their panicked state, they will scurry about and head for the nearest exit as you blast them with a spray of pressurized water.

Once they have all fled into the night, be sure to spray all of their bedding and possessions out of the bomber to keep them from returning, then secure the doors and windows. 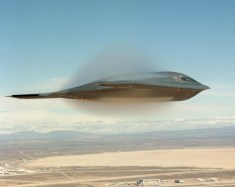 This would be an excellent time to consider relocating your stealth bomber. Your monthly hangar fees are, after all, one hell of an expense. There are a number of completely free options available, many of which you've probably never considered.

Do you only need to store your bomber during the night? Most golf courses close after dark. They're spacious, serene, and rarely patrol at night for illegally parked aircraft.

If your parking schedule is more sporadic, why don't you just put your bomber in a large body of water? It should float. Objects in water are, after all, more bouyant than they are in oxygen, and planes have no problems flying in the air.

Remember when you bought the stealth bomber and the salesman insisted that you upgrade all of the internal wiring to Monster Cables? He used a lot of words like platinum coating and frequency shielding and high definition signals. There was a lot of talk about buying the best to protect your investment, and it all sounded really good. Well, he was lying.

Those cables are simply more expensive. They're not better. At all. Go ahead and exchange those for the cheapest brand name HDMI cables you can find. It might take you an afternoon to rewire all 18 miles of instrumentation, but you'll come out nearly ten million dollars ahead.

Finally, the topic you've been dreading. The bombs.

All you have to do is cast a mold of one of your B83 nuclear bombs, then fill that enormous mold with another material that's far cheaper. For instance, truffles, or perhaps gold. There. Now you have a devastating payload for a fraction of the price.

There you have it! Following just one of these suggestions should make it far easier to keep up with the costs of maintenance. If you implement all of my ideas, your stealth bomber will practically pay for itself!

Oh wait, I probably should have mentioned that hidden "Pay For Self" button on the instrument panel. In retrospect, it seems like that might help.