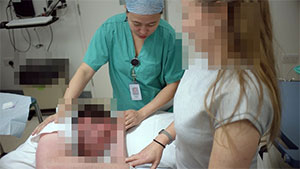 "I thought the internet was all fun and games. Grow virtual plants on Facebook. Send email to grandma. IM friends with emojis. Michael Fucking Jackson Eating Popcorn Dot Gif," said the Stupid Ass Teenager, currently dying in an Idiot County hospital. "Never in my wildest dreams could I ever possibly humanly imagine that doing stupid ass internet shit in real life might get me mortally injured."

The Stupid Ass Teenager is of course referring to the popular "Make Yourself Dead" viral challenge, which is known for being something stupid that appeals to stupid ass people. In this viral internet trend, teenagers are encouraged to become dead by any means possible. Recommended methods include readily available handguns, prescription medication overdoses, or treading on that yellow flag with the snake on it who looks mean as hell.

"I thought it would be cool if I made myself dead to impress my friends online," the Stupid Ass Teenager painfully remarked, in between repeated bouts of near death. "What harm could I possibly suffer by acting totally fucking stupid in an attempt to outstupid the other Stupid Ass Teenagers competing in the Stupid Ass Viral Trend? It turns out this was a mistake."

And a grave mistake it may be. Doctors in Idiot County are confirming that her self-inflicted mortal wounds may, in fact, be fatal.

The internet (stock photo)When it comes to regrets and considering that all actions have consequences, many members of the Stupid Ass Teenager community express confusion and utter bewilderment at the concept, the doctor continued. "Many Stupid Ass Teenagers traditionally exhibit similar behavior. For example, they act in the fashion of a stupid ass. They are also teenagers." The doctor then pointed to a line graph. "This is a line graph," he explained.

While the chances of the 14-year old Stupid Ass Teenager surviving their mortal injury remain slim and possibly less than or equal to zero percent, they remarked on having no regrets. "I regret it all, everything about it, absolutely," the Stupid Ass Teenager said through one of those machines where you type with a giant straw in your mouth and kind of poke the keys from really far away and it reads it out loud in a weird robot voice. "But I'd definitely do it again."

A representative for Stupid Ass Teenagers could not be reached for this report, under the circumstance that they were very dead at the moment of publishing.