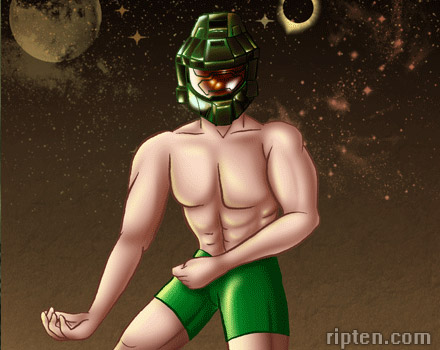 Master Chief removed his armor and took out his rod, from which hung balls of considerable size, and Master Chief began to swing his sex tool into a circle and he came over and put it up against Mile's ding dong, which was also substantial, although not quite so much as Master Chief's. They rubbed their dongs together and made sounds that carried through the office.

"That is good, what you are doing is good," said Master Chief. "Do it more and with the swing."

"I learned a trick in Paris Zone. It involves my butt."

Then there was the smell of rings dropped and the smoothness of the 360 ramp under Master Chief's head and the music went faster and so did the motion of their arched bodies and Master Chief with his helmet that moved and reflected the lashes of Tails and the office and everything, and for Tails everything was gold from the helmet visor, all of it, the twitching, the slow down screech, the corkscrew, all of that gold, distilled into perfection.

A final bounce of coins finished their pleasure and Tails was ashamed of himself and aware of his tails and all his coins spilled and bouncing around the office.

"I had better get those," he said and did not look long upon the tawniness of Master Chief stretched upon the floor and instead collected his coins before Master Chief might rise and finish the deed.

"Like men," agreed Tails. "Not all laws are written by the same hand and not all men of law are weened from the same milk." 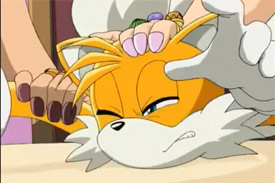 Master Chief held one of the government bills with his own helmet depicted in a sketch. The reward was 100 rings. Enough to get out of being a lawman and start a new life.

"Robotnik did this?" asked Master Chief.

Tails was hard and ready to go again.

"I want you more," said Tails.

They began to do sex again and turned the office into Jungle Zone, but it was a Jungle Zone of trees of flesh and sounds of smacking butts, a never ending race up a loop, rising and descending, spilling rings to be caught or not caught as pleasure decided.