I am a man for hire. Not a hitman, I wish it were that simple. That's not to say I haven't cracked a few skulls and shot my share of men in the back, but it's not my primary job description. I walk into impossibly dangerous situations for a rotating cast of wealthy individuals who wish to keep their own hands clean and their heads attached. If all hell breaks loose - and it usually does - I walk out unscathed. I do not say this to brag, but because it is the one thing I am good at and what I'm paid for. I am a survivor. If you don't believe me, I'll show you the shirt I bought at Disney World that reads "I Survived Space Mountain". I wear it as a badge of honor. The steel track my fake spaceship rides upon was laid down by the hand of Mickey himself, and I will outlive you and everyone you love. I can stick my hands and head outside this vehicle at all times, and will still be riding long after you've turned to bitter dust.

I am on an undisclosed floor in Nintendo's headquarters in Japan. Their recently released video game console, the Nintendo Entertainment System, has swept the globe and turned them into a power player overnight. A company that makes children's games doesn't seem likely to hire a man such as myself, but they have paid me handsomely so I ask no questions. The room I sit in is minimalism personified. Bare soundproof walls, ceiling, and a tile floor with a drain in the center of the room identical to those found in locker room showers. One door. One table. Two chairs. Everything white as fuck and spotless, a germophobic klansman's wet dream.

The man sitting across from me wordlessly slams a stainless steel briefcase on the desk, unlocks the latches, and slides it toward me as though he's going for the briefcase sliding world record. My instincts are sharp and I easily catch it before it rams into my ribcage. Great. Asshole's testing me.

"Open it." he says bluntly, and I am alarmed to see that he has gotten out of his chair without catching my attention and is now lazily slouched against the far corner of the room. No one should be able to duck under my radar so easily, especially when they're sitting three feet away from me in an empty room. As if reading my thoughts, he cocks his head and smiles. There is something very wrong about this man. His very presence is so elusive that he blurs into and out of my vision even as I stare directly at him. An assassin. He has to be. It's not abnormal for my clients to deal with me through a proxy of hired muscle, but this is different. This guy's not your average goon, he's big time. Things are not adding up.

"Open it." he says once more, his monotone voice simultaneously coming from all directions and none in particular. 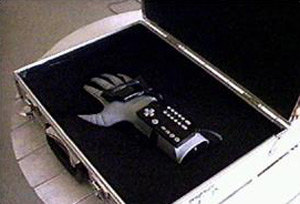 If he wanted me dead he would have made his move by now, so I abandon the exhausting task of keeping track of the unnamed man and flip open the briefcase. Its inside is lined with the standard black padding found in most gun cases, but resting in the precision-cut cavity is a grey and black glove with a panel of buttons attached to the top. The thing looks like something Darth Vader would wear if he decided to take up skateboarding.

"What the hell is this?" I ask, and am only marginally surprised to find my creepy friend is now behind me, looking over my shoulder.

"This, Mr. Bannon, is the Power Glove. The prototype of a device of considerable, well, power. No one has fully tested its capabilities yet, and that's why you are here. You will be the first to wield it." He does not attempt to conceal the jealousy in his voice. "Go on, put it on."

I do as he asks, half expecting the thing to shock me or tighten around my arm in a death grip.

"It's so... bad." It doesn't carry the heft that I'm accustomed to from traditional weapons, and the open fingers complete the sensation of wearing a futuristic hobo's garment.

The man bristles at my casual insult of the item he covets, then produces a clunky tripod with goggles attached to the top which he sets on the table in front of me.

I press my face against the goofy device and am met with a nightmarish red world populated by robot pugilists and plumbers playing tennis.

"Why is everything so annoying and red?" I ask, so appalled that I dare not look away.

"You will get used to it, that's the testing area."

I feel the lightest of touches, and realize he has pressed some of the Power Glove's buttons while I was preoccupied. I whirl around angrily, but of course he is no longer next to me.

"I have activated a countdown in the Power Glove which will teleport you to the N-Zone in twenty seconds. There you will survive as only you can, with the aid of the glove. Learn all you can and report back with your findings."

"Teleport. Are you serious? How will I return?"

"The code I entered will take you on a round trip, it will automatically bring you back. The funny thing about the N-Zone, Mr. Bannon, is that for every six seconds which pass on Earth one year passes there. I am perfectly comfortable with waiting one minute while you gather a set of extensive test results."

My eyes widen and I make a frantic move to take the glove off, but the twenty seconds are up and I find myself dropping through reality into an infinite sea of red.

I pop back into the room and blink uncontrollably, a red afterimage burning angrily over the first real colors I have seen in ten years. The nameless man is waiting with a clipboard in hand and a smile on his face, ready to ask how things went. The bastard won't live to hear how I used the Power Glove to fight off seventy robot boxers at once and turned their remains into a suit of armor by simply willing it to happen, or how I came upon Koopa's lair and smote him by pretending to crush his head with my fingers from afar then took Princess Toadstool and lived in sin with her for seven years before realizing the glove could please me more than any woman. Ten years of my life in a digital hell. His death alone cannot compensate for that, but it will be a great beginning.

I raise the Power Glove toward him and touch my middle and ring finger against my palm, unleashing a plasma blast which was simply another shade of red in the N-Zone but is a brilliant flash of blue here. He dodges entirely too easily, and slips out of sight instantly. I am about to die at his hands unless I act quickly.

I have absolutely no idea where he is, but I close my eyes and think of the enigmatic man as I swing my fist wildly, and the Power Glove's aim is true. There is a satisfying moment of impact as the upper left side of his head bursts, but instead of the wet and squishy sound I expect there is a hollow chok! akin to a rice cake being snapped in two. I open my eyes in time to watch the man hit the ground, and cannot comprehend what I see.

The inside of his gaping wound is not a leaking mess of grey matter and bone fragments. It is a padding the color of cardboard and the consistency of styrofoam. The trails left by my knuckles are perfectly preserved in its grainy surface.

With a great amount of effort the man struggles to lift his head and trains his remaining eye on me.

"I am error." he says matter-of-factly, and he crumbles into thin air.

The room's door swings open and in walks a laughing Shigeru Miyamoto, the creative mastermind of the company. Not thinking of anything but escape, I use the glove to levitate the sole table in the room and fling it toward his head at lightning speed. With a casual wave of his hand the table rebounds off some sort of invisible barrier and streaks past me. He laughs once more at this. 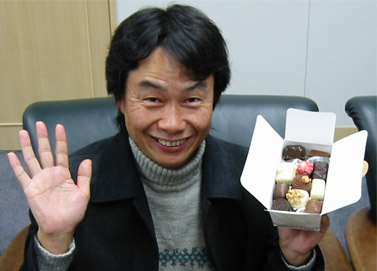 "Mr. Bannon, meet Megaton." He displays his hands palms-up, revealing a series of rings on his fingers which are attached to glowing gyroscopes. He is grinning happily, and it's surprisingly hard to resist returning a smile of my own. He loves this stuff. "This is something we hope to use as a controller for a future console. Who knows. For now I suppose it serves the purpose of stopping airborne tables quite well."

"Yeah well, let's just say you guys owe me quite a bit of overtime pay."

"Oh, undoubtedly. My assistant was overzealous. The trial was only supposed to last a few hours for you and mere milliseconds for us. You will be compensated to the point that you will never need to work again. In the meantime, what of that glove? What can it do aside from what I have seen firsthand?"

I tell him of the lasers, the plasma beam, the mind control, the reflex booster, and the AM/FM tuner.

"It's entirely too much. We were hoping it would, you know, move game characters in four directions, have A+B button functionality and maybe turbo mode."