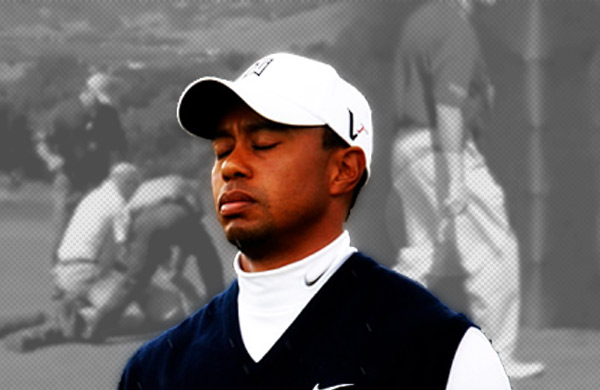 Salvador Dali lived an outrageous life and drew inspiration from moments of absurdity, often of his own creation. I was reminded of Dali when I heard a man had hurled a hot dog at Tiger Woods. Dali would have enjoyed it. Something else was on Brandon Kelly's mind when he winged his weenie at the famous golfer.

"I threw the hot dog toward Tiger Woods because I was inspired by the movie `Drive,"' Kelly said. "As soon as the movie ended, I thought to myself, `I have to do something courageous and epic. I have to throw a hot dog on the green in front of Tiger."

It's hard to imagine a scenario in which throwing a hot dog is epic, but otherwise, mission accomplished. A hot dog thrown in the general direction of Tiger Woods. According to reports - and a video being relentlessly scrubbed from the Internet - the hot dog sort of broke apart into its component parts and fell to the ground twenty feet away from Tiger Woods. The frank was flung close enough for security, who ushered Woods off the green and charged the sausage sniper. Kelly laid down on the green and put his hands over his head, denying the security commando with the greatest alacrity the pleasure of horse-collaring Kelly and pummeling him into the sod.

It's easy to see Brandon Kelly as a lunatic. Possibly a moron. Definitely somebody who misreads the message of movies. But hearing all the sneering coverage of this event on TV and reading it on the Internet I was struck that I sort of wanted Tiger Woods to be hit with a hot dog. It was not a compelling urge, more of a whim or a slight craving of the sort one might have for, say, a hot dog. I wanted to see Tiger Woods - the guy who once texted to a woman that he would hold her down and choke her - lining up a shot and getting smacked with a floppy, greasy tube of meat. Or a piece of pizza. Or an ice cream cone. Or a rotten piece of fruit. Just once and for a moment I wanted to see his life become unexpectedly interrupted by the absurd.

That is at the heart of why I believe Brandon Kelly deserves our respect. Society abhors the absurd. No greater threat exists to society than for us to realize we no longer have to take it seriously. People like those security guards are lurking everywhere, white blood cells in our collective human body, poised to surround and isolate and destroy the absurd. Ever seen a streaker run onto the field at a European football match? Even making fun of a doofus like Kelly is a response conditioned into us. Of course it's stupid for somebody to run onto the green at a golf game and chuck a hot dog at Tiger Woods. What an idiotic thing to do! What an absurd thing to do!

What inane bubble of self-importance could more desperately need puncturing than the world of golf? Rich people plodding around private parks with servants who give them clubs to swing away at balls. Those balls are so small they barely even register on the nationally-televised event. This tedious, slow-motion parade of geriatrics and wunderkinds is greeted with hushed reverence by onlookers. Even the announcers speak in a whisper. That sort of bullshit needs a hundred of Brandon Kelly.

Politics could use the occasional hot dog as well. On September 9th, 2009, President Obama was issuing one of his tedious and self-important State of the Unions when some boring thing he said prompted a Republican self-important moron by the name of Joe Wilson to shout, "You lie!" A huge uproar ensued. The event was just a boorish continuation of the usual Washington shitfight.

Wilson's barbaric yawp was a missed opportunity. A little absurdity might have deflated the pomp of a State of the Union. Marcy Kaptur might have thrown a gyro up at the podium. Eric Cantor could have tossed Purim candies at Nancy Pelosi. Or somebody in the gallery could have waited until a pause in the speech and made a huge fart sound with their hands.

Loathe though I am to use the word, that fart that echoed across 100 million TVs and played endlessly on Youtube videos would have been dangerously close to "epic."

Nothing big changed because of Brandon Kelly's inept hot dog assault. Tiger Woods walked away unharmed, the interminable match continued for all of the sad bodies who like golf and Brandon Kelly was escorted away to a brief stay in jail. But he goes home from jail with a story. He saw Drive, ate part of a lousy hot dog and now for the rest of his life he will be "that guy who threw the hot dog at Tiger Woods."

It seems pretty absurd, but what did you do with your Sunday? I procrastinated some projects around the house and watched something bad on Netflix. Brandon Kelly threw a hot dog at Tiger Woods.

I think Salvador Dali would side with Brandon Kelly over me and everyone else.