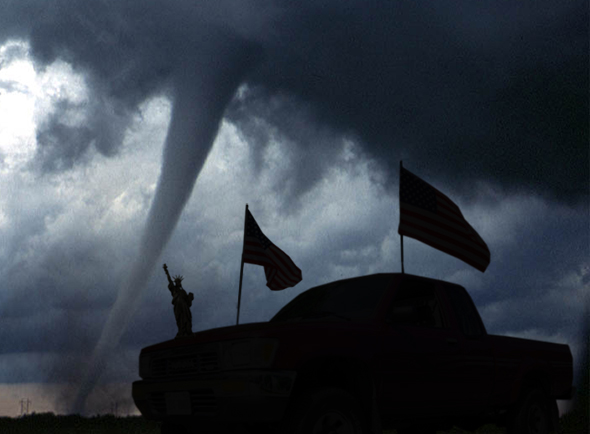 Let's get one thing clear right out the gate, pardner: I like Trump. Too much mustard but that don't bother me. He's right there on Mt. Truckmore's back cab winder, 'longside Ronny Reagan and Andy Jackson and Papa Bush, keepin' carjackers and Austinites at length. But, truth be told, they're all playin' second fiddle to the life-size portrait airbrushed across my tailgate, the true focus of Mt. Truckmore, the greatest president in the history of the world of America. Trump is tall hog of the trough now, but won't never be another George W "W" Bush.

Y'all think the greatest cowboy president who ever lived- Teddy Roosevelt and LBJ bein' commies and all- would've sent our whole economy up the spout when some funkified kids took French leave from work? Not by a jugful. You think W would just roll over for them slumguzzlin' eggheads and knock the whole kit and caboodle in a cocked hat on account of mother nature is raisin' some sand? Not by a long chalk, dude. George W "W" Bush is a man's man, he was the son of a man's man which makes him so gul-durn manly I might go commission another tailgate, and this time find somebody that ain't too sour to do it nude like I wanted in the first place. George W "W" Bush ain't afraid a nothin', least of all some piddly cloud hidin' in air. Least of all a buncha gul-durn namby-pamby tornados.

I can not believe the bellyachin' from these kids. "But Bill, we better stay indoors where it's safe", "but Bill, governor says stay away from winders"! That dog won't hunt, son. W was governor too, I knows my world histry. You think W didn't have clouds when he was governor; 'course he had clouds. More fellers put under the snakes by warshing machines than by tornado clouds every year and that's a fact I learnt at a church, so you can keep your objections to yerself, tornado apologist.

Tornados hate our freedom. If we give it up now it'll be a tee-total loss. Tornados don't scare me, my dog could whup an F1, I've read up on it. I can't wait for a tornado to try and break into my house, I'll stand my ground, yessir. Put that whirlwind six feet under, and won't a body cry over'm.

George W "W" Bush was a dabster at danger, the man understood it. You hide like a whimperin' runt at first twig of a little baby F1 tornado, and there you ain't, pardner. It's open season. Hurricanes, earthquakes, meteorites, they'll all be drawin' straws to stomp on our freedom. 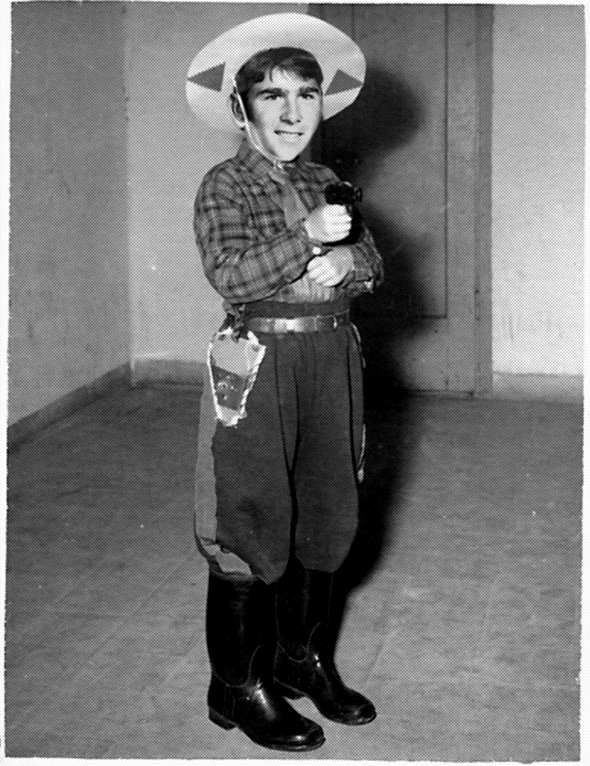 I reckon W got dusted by bullies as a little buckaroo. Probably not too bad since his daddy was a CIA boogeyman and I imagine anybody roughin' up his boys got to meet the pale rider. But somehow or other, W realized early on how danger works, and just went on a tear agin' it. W is the man who does not abide bullyin', not by terrorists, not by courts, the press, elections, the supreme court and certainly not from no gul-durn cloud. Maybe W was scared of tornados when he was a little-bitty shaver, but once he'd planted a couple schoolyard bullies in his daddy's boot orchard he overcame. Nohow do you show a notch a' weakness with danger, or fast as you can say Jack Robinson you're practicing sharia law in the wreckage of your trailer home. Happens so often it's tinker's news.

That's why ain't nobody can corral me, nossir. My freedoms ain't for sale. When I feel like moseying on over to Assault Rifle Annie's I hop in Mt. Truckmore and I'm there, greased lightnin', don't matter if Annie's is closed by some yeller-belly box herder who'd mess his breeches if the governor said boo. "Gotta protect the girls" my biscuits, Ken, go boil your shirt. That runty twister went right down the boards in front of your place and didn't even glance askew at Annie's. Probably knew I might be inside, jawin' with W! I have often thought it was the classy kind of cathouse an ex president could appreciate. So I'll just hang out in the parking lot reading girly papers and nippin' some oh-be-joyful until Ken comes to his senses, and there ain't nothing no funnel cloud or state patrolwoman can do about it. Let 'em blow that sireen at me, officer Katy. Me and the whole county, I don't care. I ain't goin' home until I'm gul-durn-well ready. Or do you want the tornados to win?

Countertornadoism is the code of the West, nationalized. We let the tornados keep us indoors there'll be no end to pushing America around. Right when we need the bravery of a cowboy president most, we have turncoat governors bushwhacking the very same White House George W "W" Bush painted white with his own two hands, nude as the day he was born. Unafraid. Tornados can't take the freedoms of a man who's unafraid, pardner. That dog won't hunt.