How do we fix it? First of all, don't have kids. For every Heisman Trophy winner sperm in your balls there are a million unemployed loser sperm. Every time you screw a fat girl with low self-esteem without a condom you're playing Russian roulette with your dick, only instead of bullets, it shoots out a lifetime of misery.

Otherwise, dad would do well for himself to vote for better transportation options in America. Tell dad to write his congressman and demand electrified trains, nuclear power, and legalized marijuana. These three things will fix most, if not all, of the problems in this country.

I once asked my grandfather what trains were like when he was a kid and he told me, "I'll tell ya, kid, they sucked then and they suck now. And fuck you for asking." Then I asked him why trains suck and he told me, "We drop the bomb on these Jap bastards and 20 years after the war is over they're building bullet trains through rice paddies and soy sauce. Give me the good ol' American highway system over some nip train, kid. Now get the hell out of my sight before I beat the queer out of you!" 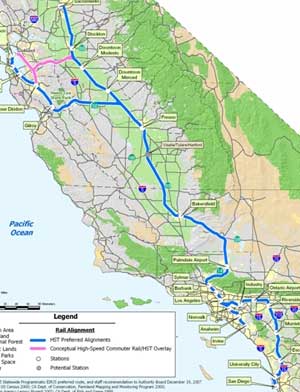 I'm more attracted to this map than I am to most women.As my grandpa demonstrated, trains have not been thought highly of in the United States. They are outdated and slow, unable to compete with the automobile, jet, Power Wheels, or personal canine transport. The only thing close to a high speed train, the Acela Express, has been heralded as the next generation of rail travel but in reality it runs on last generation's TGV technology. Amtrak bought that train at France's garage sale and runs it on depression-era tracks.

The Federal Railroad Administration has designated several corridors where high speed rail service might flourish. Of course, there's no money to build any of these lines, but hey, that map still gives me a boner.

The only high speed rail corridor that stands a chance of getting built within the next 50 years is in California. This November all eyes will be on Proposition 1, which would provide roughly 10 billion dollars to start construction on a high speed rail line between Los Angeles and San Francisco. If Proposition 1 passes, and it won't, it may pave the way for high speed corridors in other states. One day we may even surpass countries such as Spain, China and Turkey when it comes to high speed trains!

In order to power all these crazy trains we'll need nuclear power plants. Someone in Debate & Discussion's joke forum mentioned that France is 70% nuclear and has not become a smoldering crater. I'm too lazy to verify that claim but I'm going to go out on a limb here and say that I'm pretty sure France still exists.

Nothing has been more damaging to nuclear power's image in America than The Simpsons, probably because people are stupid. We have plenty of space to store volatile nuclear waste and a few deformed babies are a small price to pay for 220 MPH trains speeding between our nation's crime-ridden whore-infested metropolises. As Tim Allen would say, we need more power!

And finally, legalize marijuana. Because let's face it, you may have ridden a bullet train in your life, but you have you ever been on a bullet train... on weed???

Now there's something dad and his hopeless son can finally enjoy together.