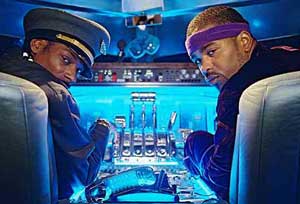 The reason why my grandfather stopped flying.In order to fly dad will have to arrive at the airport three hours early just to catch his flight and it will be delayed another three hours because of rogue fleas hijacking the plane. Before boarding he will be subjected to all manner of probing and prodding by airport security. He will exclaim, "Hey! I'm no towel head! Why are you searching me?! Spread open Ali Baba's buttcheeks over there instead!" nine times before he actually gets to his seat.

The stress of flying is causing dad's blood pressure to rise dramatically. There are screaming babies. A kid is kicking his seat. His business expense account only covers the cost of a coach seat. He could have afforded an upgrade to first class but his son runs five separate PCs to play five separate characters in five different MMOs, which makes for a very high electricity bill. This makes dad so mad that he wants to strangle his son and break his computers, but he remembers how his dad used to beat him and he swore he would never turn into that kind of father.

During the flight his leg will cramp up and a clot will form because of the cramped conditions, stopping the flow of blood to his heart and triggering a heart attack. The plane will be forced to make an emergency landing in Delaware, but not before he is pronounced dead in the air. All because he didn't use a condom.

The agency that runs national rail operations in the United States is Amtrak, which stands for complete and utter shit. Amtrak is mostly subsidized by the government and railfans. About half the people riding on Amtrak trains aren't really going anywhere for any particular reason. They are old farts with a pension and too much time on their hands, and white trash. 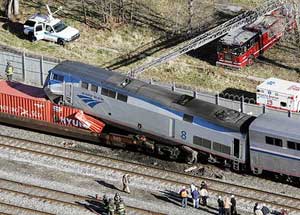 Well, they get an A for effort.But it was comfortable. Dad's coach class seat was like a first class seat on a plane. He could get up, walk around, and shake out the clots in his legs. The gentle rocking motion of the train helped him fall asleep, and he dreamed of the time he tried to connect with his loser son. Dad bought him a video game that they could play together, but it was the wrong game, and his son yelled at him for buying it and chastised him for being so lame. It was The Incredible Hulk, and it wasn't even two-player, but dad didn't know that and the guy at the store never told him.

Dad awoke with a shudder and tried to figure out how much further it would be to his destination. They were supposed to be in Chicago an hour ago and they were only in Galesburg. Knowing that he would be late for the meeting and lose the big account and be fired, dad retreated to the lavatory and hanged himself with his own belt. As his brain was deprived of oxygen, his last thoughts were of his son and how he failed him. He was discovered at Chicago Union Station and pronounced dead at the scene. All because he didn't use a condom so many years ago.