Who buys new AC/DC albums these days? It must be people willing to accept slight, diminished variations on the same tired set of songs because they fear change and deny artistic evolution. Also, they like that AC/DC still plays the simplest, dumbest music imaginable, both lyrically and musically -- no challenges, no surprises. So, the band's key consumers are conservative, lazy people looking for something easy, familiar, predictable and stupid. Really, it's a miracle that AC/DC didn't start its partnership with Wal-Mart until its brand new album Black Ice. 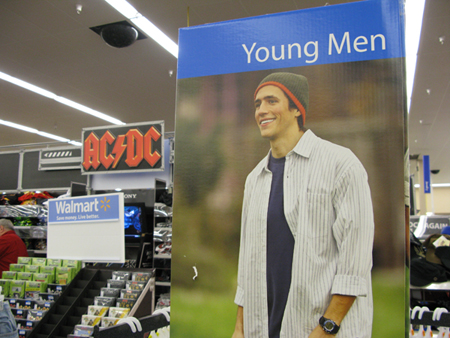 Buying music at Wal-Mart is like ordering sushi from a grocery store: You probably had better options, and if you somehow died as a result of the transaction, no one would feel the slightest sympathy for you. Instead of finding space for AC/DC's Black Ice in its CD section, Wal-Mart created a makeshift display in menswear. It's a savvy move, because while Young Men can bypass Wal-Mart's exclusive distribution deal (400,000 people ripped Black Ice from BitTorrent a week before its release), they can't download Freedom Panther T-shirts and jeans with bedazzled skulls on the butt. I can't imagine the olive-capped douchecake pictured in this banner buying Black Ice. He'll get his AC/DC fix at strip clubs, where "You Shook Me All Night Long" plays in perpetuity. 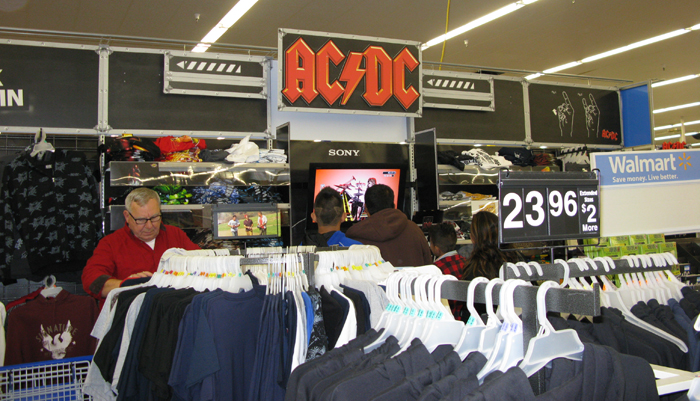 This panoramic view illuminates AC/DC's core fanbase -- old white dudes and gamer kids with weird shit shaved in the back of their heads. The representative from the latter group is playing the Wal-Mart/MTV collaboration "AC/DC Live: Rock Band Track Pack," a desperate attempt to get young people to acknowledge that AC/DC still exists in the present tense. They're preparing to recreate selections such as "Smash 'n' Grab" and "War Machine," which they'll soon discover are much more boring than their titles suggest. The instrumental tedium might render the guitarist and rhythm section comatose, but the singer has the hardest task. I wonder how many forks you would have to swallow in order to replicate Brian Johnson's corroded yowl. 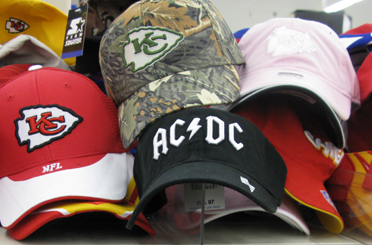 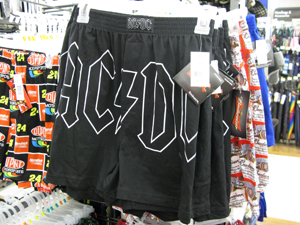 Wal-Mart sells AC/DC hats, here contrasted with Chiefs caps: Both once-proud franchises have experienced an embarrassing decline. The placement of the lightning-crotched AC/DC boxers between NASCAR and Budweiser patterns suggests racing-sponsorship possibilities, especially since Black Ice contains a brainless song called "Wheels" that seemingly exists solely for future use in car-related commercials. However, NASCAR morons like fast things, and Black Ice operates at two settings: "School speed limit" and "idling." Some of these sluggardly tracks would need juice from a generator just to qualify as power ballads. 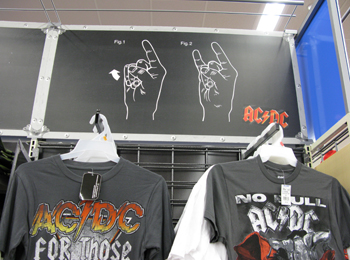 Because it unfurls so slowly, Black Ice continually reminds fans that they're listening to rock and not, say, quiet storm R&B. Four songs contain "rock" in their titles ("Rock 'N' Roll Train," "She Likes Rock 'N' Roll," "Rock 'N' Roll Dream" and "Rocking All The Way"), while five others reference "rock" in lyrics like "rockin' rollin' soldier," "got a taste of a rocking band" and "decibel/that's the story of rock 'n' roll." AC/DC might as well be named Rock at this point, so when they sing about it all the goddamn time, the songs shift into Malkovichian overdrive. Mercifully, AC/DC doesn't perform much fuck talk on this disc, though between the group's inherent sleaziness and its members' burgeoning senility, it's hard to tell how many of these lines are attempted euphemisms:

AC/DC has been opposed to the online sale of individual tracks for some time, ostensibly in order to preserve the artistic integrity of the initial sequencing. ("Hard As A Rock" must segue into "Cover You in Oil," or else you've ruined the intellectual cohesion of the album Ballbreaker!) Black Ice demonstrates another way to thwart single-track downloading: Make every song so lethargic and indistinct that no one has incentive to differentiate between them. But fuck those computer nerds, anyway. Black Ice is made for the sort of Young Men who buy their music (along with their pants and their pre-faded football jerseys) in person at Wal-Mart. 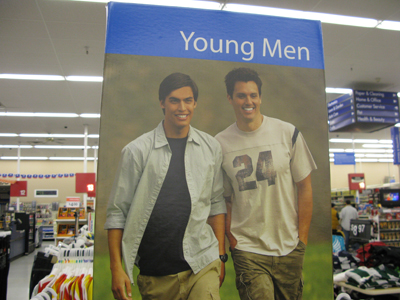