A Retrospective of Satan

Satan: A Look Back on Evil 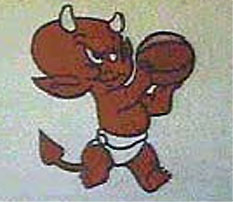 The extremely intimidating and artifact laden Devils Lake mascot.The Unlord, the Master of Disaster, one part of the two part tag-team we like to call Christianity, Lucifer, the Devil, Old Scratch, Hammy the King of Lies, Potbelly's Three Cheese Toasted Sub, Satan. Call him what you will, he's been with us almost as long as this goddamn back pain, but signs seem to indicate that his popularity is beginning to wane. I had long feared that this might be happening but concrete evidence finally presented itself in the appropriately named town of Devil's Lake, North Dakota.

High school teams here no longer will be known as the Satans, the school's nickname for nearly 80 years.

The school board unanimously voted Monday night to immediately drop the nickname and mascot and start the process of finding a new name to represent its athletic teams.

After one look at a picture of their Satanic mascot I considered turning this article into a rant about how high school mascot's could pull the teeth out of even the most fearsome concept. Then I remembered that my high school's mascot was a yellow jacket and that rancid costume was ten times scarier than an actual yellow jacket, unless we're talking a yellow jacket that is stuck in the car with me, in which case nothing is scarier than that. Instead I would like to make this a celebration of His Sulfur and Brimstone Unholiness, a genuine and heartfelt memorial for that evil that has touched all of our lives. In these last years of his career I hope he takes on a sort of mystical dignity, finally shedding that juvenile horns and tail image and retiring to his beach-side home in Key West.

Satan didn't start out famous though, like most celebrities his was a gradual rise to popularity marked by triumphs and tribulations. If you're living under a rock or possibly a rock that itself is underneath a larger rock and somehow missed out on Satan's career, then this will all be new to you. 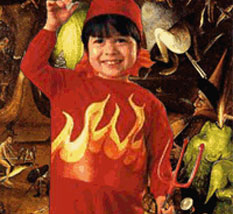 This crudely Photoshopped im age I found on a Halloween web site proves that Satan has fans of all ages!Satan was born in 1952 in Borland, New Jersey, the middle child in a family of three brothers including Roy and Danny. His father Arnold Jarvis worked in the Borland Iron Works, bringing home just enough money to keep food on the table and clothes on his children. In fact so poor was the family the one year they couldn't even afford clothes and were forced to tie pieces of pork loin to their body with twine and fishing wire. Satan never really knew his mother Barbara, who was killed by a runaway horse when Satan was only two years old. Many believe that this early loss may have influenced Satan, leaving scars that down the road would lead to the creation of his well known "bad boy" persona.

In school young Satan never really felt like he was welcomed into the social circles that his brothers kept company with and he quickly took to hanging with a gang of ruffians. These boys enjoyed playing all manner of mischievous pranks in the neighborhood, including egging, toilet papering, ritual beheadings, turning rivers to blood, and of course the infamous time in 1969 when Satan and gang stole principal McMaster's bowling trophy. Oh, McMaster's got so mad at the ruffians, you should have seen his face when Satan turned his wife into a giant maggot that vomited acid onto his car and then made the sky rain fire.

Satan finally finished up high school a year behind his peers and headed off to the New Jersey Institute of Science. Unfortunately his grades were so low that Satan was placed on academic probation and eventually discharged from the university. After months of drinking and womanizing, Satan got his act together and headed out into the job market, where he found himself working in the mail room of IBM. His biting wit, omniscience, and ability to trap superiors in blood oaths through the use of guile and intimidation shot him through the ranks until he was in the head office in Silicon Valley. Somewhere along the way he was also responsible for the Vietnam War, the assassinations of JFK, RFK, MLK, and LLJK, and the election of Richard Nixon. Little is known about Satan's direct involvement in these events, but shipping and billing records recently made public by IBM made apparent that first-borns were demanded and received.

Never content to rest on his laurels, Satan eventually tired of his mundane job at IBM and moved to Los Angeles where he was drawn like an astronaut into the sun by the bright stars of Hollywood. There he set up shop and began working diligently to promote and advance the careers of struggling artists through the use of unholy magic. What started with Abba continued through the years until everyone from the Spice Girls, to Fred Durst, to L. Ron Hubbard had been catapulted to success despite a lack of talent or charisma. Critics quickly began using the term "soulless" to describe artists in league with Satan when the details of a contract with rapper Vanilla Ice were released. Rapper Robert Van Winkle had indeed forfeited nothing less or more than his immortal soul to Satan in exchange for unknown favors that allowed him to become a platinum-selling artist. 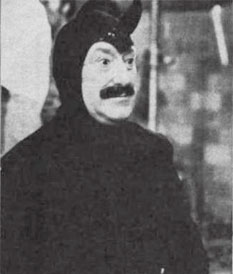 Photographed here in 1981, Satan shows off his trademark manic stare, not pictured are his tail and pitchfork.Over the years Satan had collected and tormented so many of these souls that he needed a place to keep them, out of the way of prying eyes. In a deal made in conjunction with sponsors at the Pepsi Corporation, Satan set to work on his most ambitious effort yet; Hell. There and forevermore the souls he had collected during his time as a Hollywood mogul and IBM executive would be tormented by all manner of cosmic horrors. Billed as a "theme park" and located on three hundred acres of salted ground near the site of an Indian burial ground, Hell was soon to draw crowds numbering in the hundreds of millions. After its grand opening in 1983, Hell was bringing in some 70,000 people a day, and with good reason. Attractions at the park included "Cauldron of Flesh Eating Beetles", "The Amazing Tilt and Eviscerate", "Mr. Toad's Wild Anus Full of Fish Hooks", "Crazy Time Station and the Giant Lion With the Face of Your Mother that Crushes Your Head in a Vice", and "Your Genitals in Lava".

Despite - or perhaps because of - this success, Satan was in the process of falling prey to his many old vices. He was staying out late and drinking himself into comas, indulging in drugs and perverse sex, and turning into wild animals and impregnating women with the anti-Christ. He was losing weight at a dramatic rate and many of his closest friends feared he might be near death.

"Sate was just gone," commented Hollywood producer Robert Evans in 1998, "he would come in early to an amazing party and he was already completely gone. You could see it in his eyes. Great guy though, but bad things happen to good people."

It took a near death experience at the hands of the avenging wrath of the Lord Almighty to shake Satan from his downward spiral. In 2000, while Satan was out partying in West Hollywood, a tree exploded into flames and before it appeared the archangel Gabriel, carrying a burning sword of holy light. An intense battle ensued, one that left Satan with some two-hundred stitches and banished Gabriel to Heaven. His recovery was a grueling process, but it got him off the drugs and back to a sense of normalcy. When he could walk normally again Satan seemed rejuvenated, and he attacked his work as a producer with an increased vigor.

His time had passed though, the work just wasn't coming in like it had been in the late 90's, and Satan began to realize that it might be time to pack it in. With a final and heart-breaking message from one of his sales reps in North Dakota that Devils Lake would no longer be paying him royalties for intellectual property usage, Satan opted out. He packed it in and headed into retirement, but for those of us who watched and appreciated his hard work, his legend lives on.

Get the Power Up!

In between writing articles and doing stuff for SA behind the scenes I spend a lot of my day just killing time. Wonderfully horrible ideas like a retrospective about Satan don't just come popping up ever five second you know, they have to gradually percolate to the surface. With the help of an observant soul on the SA Forums I recently came into contact with the greatest of time wasters, namely an addicting but quick and violent little game entitled Crimsonland. Developed by a guy named Taro Alatalo out of Finland (the game is in English), the game has surprisingly good graphics, it's fast paced and fun, and just as importantly, it's completely free. 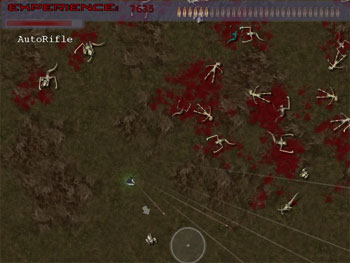 You can download Crimsonland direct from Taro's site at 10tons.org, or find out a (little bit) more about the game.

At the suggestion of the game's developer I've also provided a mirror in the unlikely eventuality that his server dies on him.

The game plays like a mad-cap top down shooter similar to Smash TV combined with the grim humor of Black Isle's Fallout. It even has an experience system and when you level you can choose perks that effect gameplay, allowing you to mow down more aliens with greater accuracy. If you enjoy Crimsonland as much as I have, then you'll be pleased to hear that he is currently developing a version of this game for multiple players over the Internet. Now you and the guy three cubicles over can finally explore your break room fantasy of standing back to back with miniguns mowing down an endless horde of advancing aliens.

Normally I wouldn't outright plug a game like this on Something Awful, but the guy isn't charging any money and the game deserves to be played, if only for an hour or two. So download Crimsonland today and release your aggression on those damn Graboids!

Well hello! It's me, Livestock, here to tell you that Photoshop Phriday is here and burning a hole in the ozone layer. This week's theme is "Awful Sports" and it's a true festival of something akin to athleticism. Here is a peak of a sneak: 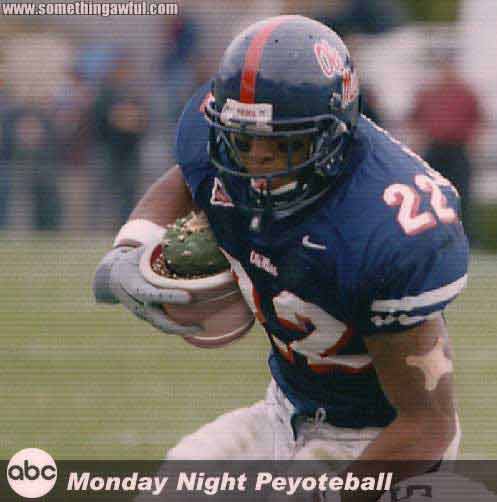 This is a random assemblage of words meant to inspire you to click this link.