Let Me Tell You Exactly How Big The Universe Is

The universe is vast. It's so darn big that you can't even see the entire thing at once unless you take a few steps back and stand on a chair.

You could get in a fast car and drive for nearly four hours without seeing the same location twice.

If you were to fill the universe with ping pong balls, no one would be able to see shit. Please don't do this. How would anyone get home? What if someone wanted to play table tennis? 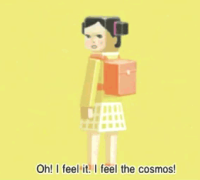 You stand on one end of the universe. I stand on the other. You hold up a sign. It's impossible for me to read what the sign says without a pair of binoculars. Wait. "I'm standing over here because you smell bad"? You rotten son of a bitch.

Usain Bolt is one of the fastest living human beings. He could try to run from one end of the universe to the under in less than four minutes, but he would only be able to run on the surface of our planet.

Imagine four universes on the edge of a cliff. Think about how huge that cliff must be. Enormous, right? The universe is even bigger.

You stand on one end of the universe. I stand on the other. You yell something. I can't hear it. This is because space is a vacuum. You take out your cell phone and call me to repeat the message. We don't connect because the reception is terrible out here. You leave a voice message. "Seriously, you don't smell good."

If you made an attempt to kiss every star in the universe your lips would start to burn a little by the time you finished.

We tend to think in relatively small units of measurement like inches and yards and footlong subs. This is why we haven't even left the solar system or met aliens yet. We're Grade A chumps. I guess this doesn't really put the size of the universe into context, but damn we are some lame bozos.

You stand on one end of the universe. I stand on the other. My back is turned. I'm crying.

When you make the mistake of purchasing cheap toilet paper, a single terrible roll seems to last forever. If you lined up every roll of bad toilet paper end to end there would still be enough trees to make plenty more. That's how big the universe is.

I could shoot a gun at a planet on the other side of the universe and by the time it killed that planet I would be long dead. Besides, it's not like I'd get in trouble even if I was still alive. It's not illegal. Show me in the constitution where it's illegal. This is my right. You always take the side of planets over people. Makes me sick.

You stand on one end of the universe. I stand on the other. A length of measuring tape is stretched out between us. On my end it says 0 then 1 Inch and so on. On your end, the numbers are so large that they can't fit between the inch markers. It's unreadable. This was a waste of time. I told you it wouldn't work.

The universe is so vast that at this very moment there exists a creature completely beyond your understanding. Its perception of the world around it is wholly unlike your own, its thought processes so fundamentally different that experiencing a single moment in its life would obliterate your mind and leave you a wailing husk. This being is currently making a parody of that one Gotye video and posting it on YouTube.

You stand on one end of the universe. I stand on the other. You smirk and crack your knuckles. I raise an eyebrow. We begin to power up. Motion lines blur diagonally as we scream, our clothes tearing as muscles constrict and flex. I pull my arms back to throw a fireball as you hover in a Jesus-like pose, a beam of pure light emerging from your chest.