Down With The Sickness 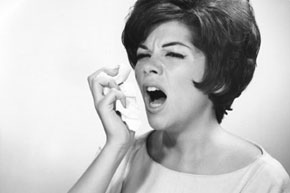 Interacting with other people is a risky proposition. On one hand, you might find someone who has that missing Pete Harshnish card you need to complete your collection, see some unlucky schlub wet his pants, or on an even more rare occasion you might even find a person that's willing to have sex with you. On the other hand, you're much more likely to wet your own pants, meet someone wearing a Che Geuvara shirt, or catch some sort of illness.

For the record, I am against illness. I've taken a lot of flak for the pro-illness sentiments I expressed earlier in my writing career but I was young and idealistic at the time. I thought that even the most lethal flesh-eating viruses were capable of redeeming themselves. Why the sudden change of heart? I'm sick. Not just "take some aspirin and a nap and wake up feeling better" sick, but "the human body is mostly comprised of liquids and 99% of them just drained out of my nose along with some sort of brown slug and oh my God when did my cranium become a seismograph capable of sensing all the Earth's movements and registering them as pure pain?" sick. For the first time I actually considered asking one of the other guys to fill in for me, but after thinking it over I realized this was a great opportunity because I can pretty much write what I want and if it turns out horrible then hey, free pass. For the horrible jokes found in every single one of my other updates, I have no excuse.

As much as I may hate illnesses now, I must admit that they are very resourceful. The common cold is constantly mutating in a vile attempt to spread across mankind time and time again long after we thought we had seen the last of it, much like Madonna. What most people don't realize is that many other popular sicknesses have permutations of their own. That's right, the very diseases whose names young schoolgirls scribble on notebook covers and surround with lovingly doodled hearts are producing offshoot strains with new and bizarre effects for those unlucky enough to contract them. Most of these permutations shed a great deal of insight into the ever-adopting nature of our universe and are wholly fascinating. The ones I'm about to talk about are not.

Common Reaction: "Oh no, I have Poisonous AIDS!"

Description / Symptoms: Poisonous AIDS is exactly the same as normal AIDS, but with one horrible addition: a deadly poison that kills 100% of its victims after a period of eighty years. Given a choice between the two, most people would choose the regular strain of AIDS over a makeout session with infomercial star Billy Mays.

Contracted By: Having unprotected sex with people who have Poisonous AIDS (identified by the greenish tint of their skin), injecting the contents of a syringe labeled "Poisonous AIDS" into your body.

Common Reaction: "Oh no, I have Narcomessy!"

Description / Symptoms: Narcolepsy is a condition in which patients fall asleep uncontrollably at completely random times. Narcomessy is a mutation of this genetic defect that doesn't actually make you fall asleep, but musses up your hair as if you slept while standing on your head on a newly waxed kitchen floor.

Contracted By: Learning to read before you can walk, having an aunt named Sarah.

Common Reaction: "Oh no, I have Herbies The Love Bug!"

Description / Symptoms: An offshoot of Herpes, Herbies is a highly annoying malady which renders its victims eligible to race in the NASCAR circuit regardless of their chassis size and aerodynamic configuration. Patients exhibit unusually cheeky personality traits and develop car doors and horns with which to play practical jokes on unsuspecting baddies. Victims typically long for Lindsay Lohan to be inside of them, even moreso than usual.

Contracted By: Sitting on an uncovered toilet seat directly after a Volkswagon (any year or model) has used it.

Common Reaction: "Oh no, I don't have the Plague!"

Description / Symptoms: Now this is a curious disease. Once infected, the subject becomes absolutely positive that he or she does not have the plague despite the fact that he or she actually does not have the plague. This curious behavior continues throughout their perfectly healthy and plague-free life, the illusion upheld through what can only be described as severe pathos.

Contracted By: Living in a modernized country, washing regularly.

Common Reaction: "Oh no, I have Bi-Polar Disorder Type 2!"

Description / Symptoms: While the Bi-Polar Disorder from which this illness originates is entirely psychological in nature, Type 2 manifests itself physically. Patients unfortunate enough to suffer from this rare condition find that their foreheads and the tips of their toes become violently attracted to the Earth's magnetic poles, often to the point that they cannot lift their face or feet from the ground without the help of several strong friends or a forklift. Sufferers of this debilitating illness must adopt a salamander-like style of walking and often find that they are socially inept aside from the rare occasion when someone drops a contact lens on the ground. For these poor souls, dirty foreheads are a way of life.

Contracted By: Arranging the letter magnets on your fridge into a particularly traumatic phrase, visiting the North Pole while on your period.

Common Reaction: "Oh no, I have Gigantic Dwarfism!"

Description / Symptoms: An incredibly rare mix of Gigantism and Dwarfism, Gigantic Dwarfism curses its victims with average height and bone structure. Victims find themselves completely unable to fit in with either the freakishly tall or the small in stature, and presumably just go off into the desert to die of shame.

Contracted By: Kicking too much while in your mother's womb.

Common Reaction: "Oh, I guess I have Cancer Schmancer."

Description / Symptoms: Victims of Cancer Shmancer develop the same life-threatening tumors that come with regular Cancer, but don't feel it's a big deal. Most wave aside the concerns expressed by others, claiming they'll be fine if they just "walk it off".

Contracted By: Being born into a family with a history of Cancer, using a cell phone in a movie theatre or book store.

That's all I've got, folks. Judging by the color of the blobs currently seeping out of my nose, my sinuses have completely run out of water and are now converting my brain into snot. At this rate I'll barely have enough brainpower to click "Submit" in a few minutes to make this update go live, and by next week I'll have to take a job writing for Ain't It Cool News.