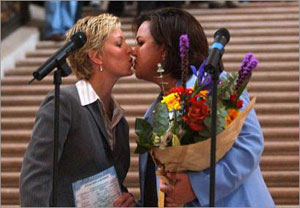 Outspoken gay rights advocate Rosie O'Donnell, seen here consuming the life force of another human.One of the lesser topics making waves this election is that of gay marriage, or as it's commonly known, "institutionalized sodomy." I call it a lesser topic because, while gay marriage is an important issue, it simply does not hold a candle to war. War is perhaps the most meaningful outlet for the full spectrum of human expression, and we should make it our primary focus always. Way down the list of important topics, right after healthcare and vehicle emissions, is gay marriage. As a straight man belonging to the coveted 18-25-year-old male demographic, I consider myself uniquely qualified to comment on this issue that has nothing to do with me whatsoever.

With upwards of hundreds of gay people living in this country, the issue is sure to be a major factor in the election, especially since both candidates pretty much said, "no way José!" On the plus side, if you are gay and Dick Cheney's daughter, you can rest assure that your father loves you. He always will, okay? Unless gay people are also magical, it looks like homosexual marriage is destined to remain as illegal as crime, which is a pretty bad thing I'm told. And, if gay people are indeed magical, it might be necessary for another series of witch trials for the safety of everyone. This all might seem unfair, but we do live in an unfair society. If you think gay rights are limited, just look at what the terrorists have to put up with. Their rights are virtually nonexistent, and with such hatred directed towards them it's no wonder they want to blow us up.

The age-old reasoning as to why gay marriage is a crime against nature is that the Bible says homosexuality is a sin, not unlike beating the Pope to death with a truncheon. Somewhere in that Good Book, sandwiched in-between the all-encompassing madness, is a line that says it is unconstitutional for a man to marry another man. This is reinforced by the story of Noah's aircraft carrier. Noah managed to fit two of every animal into a Nimitz class supercarrier and navigate around a flooded earth, evading time storms and Japanese Zeros. When the waters subsided, the earth was repopulated with the animals he sheltered. Had he not picked both a male and female of every one of the millions of animal and insect species he saved, there would have been no reproduction. Thanks to this and inbreeding we are living in a healthy and densely populated world. No thanks to you, gay culture!

Times have changed and the world is no longer recovering from a flood. People are plentiful and thusly homosexuality is a viable alternative for those seeking adventure in territories with geography similar to their own. Religion, being inarguably separate from the state these days, is no longer a valid justification for outlawing anything. So what's the real reason behind the Wild West style stance against homosexual marriage? Simply put, it's a lack of understanding on both sides of the fence. To truly understand an issue, one has to do research. That's not an easy task, and gay people need to understand this. For example, in order to properly research this article, I would have to marry another man. I simply cannot do that, not just because it's illegal, but because I am secretly attracted to women and often admire them when they are not looking, which is pretty often since I'm hideous. This creates a catch-22, because in order for politicians to understand and legalize gay marriage, they would have to marry a member of the same sex, which is illegal. Do homosexuals really want elected officials to commit crimes on their behalf? Although politicians are by nature corrupt and often criminal, we generally ask them not to be as a courtesy. That's what this issue is really about: courtesy. Homosexuals are not being courteous to the people they elected! 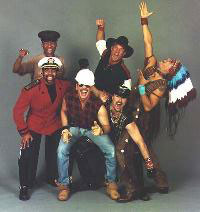 Gay people are workers just like us. They are our ship captains, our constructon workers, our Indians, and our gay bikers.So in summary: gay marriage is technically impossible. Seriously, I've proven this beyond the shadow of a doubt with science and science's older brother – logic. You can check my work again if you don't believe me, but the results will still come out the same. I'm not trying to rain on anybody's pride parade here; I'm just trying to be honest. I have no vendetta against homosexuals and I'm all for equality, even though gay people did steal rainbows and unicorns away from us. What we have here is a case of logic being the real monster and oppressor.

So if it's impossible for us to legalize gay marriage instead of making it punishable by imprisonment as it is now, what can we do to satisfy gay people in a non-sexual manner? For starters, why not expand that school voucher program? I have no idea what the holy hell a school voucher is, but it sure sounds nice. Why not give them to gay people as a sort of consolation prize? I have no qualms being bought off, so I would jump at an opportunity like this if I were gay. And marriage, being the relationship equivalent of the Titanic, is only going to end in a lot of homosexuals with broken hearts and hurt feelings. These days the very concept of marriage is worth about as much as a bushel of spoiled ham that somebody threw up on. Besides, if stereotypes teach us anything, it's that all men are pigs and all women are sluts. That fact pretty much invalidates all forms of marriage by itself.

I'm afraid homosexuality loses this round. They have a solid argument, but it just doesn't hold up against the law, which will never change because of reasons that need not be questioned. Ever. It would be nice if homosexuals could have the same freedoms we do so that they could squander them as we do, but one man's freedom is another man's gays are encroaching on my religious beliefs and God will punish us if this is allowed to pass. In the end, the man who believes he has God on his side wins, because God has heat vision and super strength. Until we figure out a way to defeat God, things are never going to change.