The following is an excerpt from the diary of Private First Class Herbert Carter, rifleman, 1st Platoon, Charlie Company, 11th Brigade of the Americal Division in the vicinity of Son My village. 1st Platoon was the leading edge of the air cavalry assault on My Lai 4, one of Son My village's subdivisions and the location of one of the worst American war crimes ever committed. Pfc. Carter's diary was essentially a long-form letter, compiled over the course of one to three months and then shipped back home. The diary was confiscated as part of the special damage control probe into My Lai. It was therefore spared the redactions one might expect to see in letters following an incident such as My Lai. 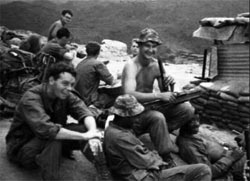 Heya chick, this is the Animal!

I'm coming to you from the ass end of Vietnam! It's hotter than a rotisserie and wetter than you after five minutes with the Animal in the back seat of my deuce. It's copasetic though cuz LT brought us some hooch and brews and we're kicking back relaxing. Duckwiser got his hooks on a couple of reels of stag films and we're watching those to get hepped up for the mission tomorrow. It's called Operation Muscatine and we're supposed to pacify a sector or whatever, which means we shoot up the gooks, smoke out their tunnels and burn down the village.

Mud Dog [Captain Ernest "Mad Dog" Medina] has a bug up his ass about killing everything that moves so I got one of those little bird things you put on a drink, you know the ones that bob up and down forever, and I stuck that on his bigass map table as we were walking out of briefing with a note saying "Charlie's Movin' Man!" and he was all "which one of you chickenshits put this here?" Nobody said nothing so he just looked all pissed off at all of us so the LT just told us to shag ass out of there. 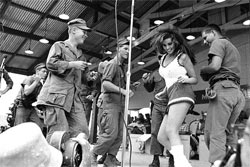 Then when we got back to our bivouacs we were getting ready to break out the church keys and then LT comes in and said that we had to dig a new trench line for the frigging dime nickels like the FAGs couldn't get off their lazy asses to dig them. They sat there and watched us for an hour although afterwards they gave us some cured swine they found on some dead gomers last week. Everyone was like "that's boss" but the Animal, well you know me. After we cleared out I went to the latrine and filled like five jerry cans with the crud that is like a mix of number one and number two and smells god awful. Then I took the jerry cans and dumped them all in the trench we just dug for the FAGS. They'll be knee deep in that tomorrow! Ha ha ha! Animal strikes again.

Anyway chick, hope you're keepin' it wet, I'm gonna knock one out thinking of that time at the passion pit when you let me toss little animal between your cheeks. I'll write more tomorrow. 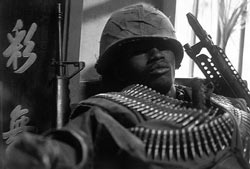 Hey babe, just writing again real quick because I had to tell you this hilarious thing before I forget it. Right now I'm sittin' next to this roadside that is totally full of dead gomers. It's hilarious. 1st Platoon totally wigged out, like LT just stood there and watched while everyone was just going buck wild. What really kicked things off was when this dude was just totally standing there with his cow out in the field and 2nd squad came around this hootch they were burning. The dude threw his arms up in the air like "hey" and Nichols lit him up good and LT didn't bat an eye. Verona was the funniest, there was this dude standing there with his hands up and Verona just totally stabbed the dude in the stomach with his bayonet. The dude was wheezing and Verona just BAM right in the head. I was in tears.

It got better though. Verona just grabs this old guy who was doing a loaf in his shorts and took out his 45 and shot him in the throat. I was like "hahahaha!" and then he freaking throws the guy in a well. I was totally on the ground laughing by this point and Verona just turned to me and gave me that cockeyed look of his and he dropped a pineapple right down the well. KABOOM! Oh man, I tell you, these guys are like Bob Hope times ten!

Once the gooks realized we weren't interested in swapping stories this time around they all started running around in every direction and it just got crazier. I saw this old woman, get this, she had a friggin launched m79 in her stomach. I was going to pretend to be a doctor and be like "here is some Rolaids for that and call me in the morning if it still feels bad" but LT shot her in the face with his sidearm. 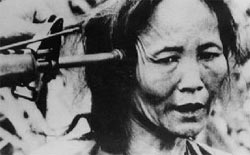 Then Sam Spade [Pfc. Samuel Washington] saw some gooks running along the road where I am now and he was like "check it, Animal" and he just lit them all up. He fed a whole chain into them sideways. Lead poisoning! Then me and Verona and Sam Spade headed over to them because a couple were still kicking around. One of them was pretty hot in a slant way and Verona took her shirt off and started jerkin' the gherkin, but she had a sucker in her lung and he couldn't get it up. Finally he planted his e-tool in her forehead to shut her up and then knocked one out all over her. Washington had a burlap sack full of teeth and he had emptied 'em out to play some b-stomp. That's where you take a gomer baby and stick it in the bag and then drop both heels on it. It's like a kike wedding or something! POP!

I was gonna knock one out when Verona finished but the gomer looked kind of gross with his nut on her so instead I got underneath a couple of dead old guys and started talking like a ghost. Verona ran and got the LT and I was like "Amellican GI, we will haunt you foll all of time" and even though LT didn't think it was funny Sam Spade and Verona were cracking in half. Then a couple of the dead gomers started to fart and crap really loud and it was just too much, I doubled over and puked I was laughing so hard.

Ok, whirlybirds are comin' for some reason so I'm gonna wrap this up. I'll write more later. I can't wait to get home and lay some pipe, chick. Hey, if you can, send me some rubbers in your next letter and then I can fill them up and send them back, I don't know, if that's gross forget about it. 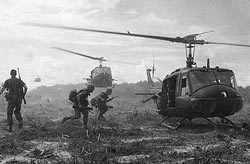 Oh man baby, things just keep getting funnier. LT had us chasing some gomers and out of the blue a Huey dropped in on us and the pilot was all "durt durt durt, I will fire on you if you don't let these people go." And Sam Spade was like "rock and roll then, honkey" but the door gunner was confused so I put this mama san's face I had cut off over my face and was like "please GI, we just want go here to join our people" and Verona was frigging busting a gut. Then I started to do my "happy talk" dance and even Sam Spade was cracking up. Then I saw this little kid, like maybe five, walk past with his arm shot off and I just couldn't take it anymore I was laughing so hard. I wish the LT had been around because he would have made that chopper move its fat ass but he was busy chucking frags into hootches half a click away.

Finally the gomers who we were chasing disappear into some jungle and the pilot of the chopper points at us and starts to lift off. Verona dropped trou right there and mooned them as they were heading up. It was the funniest thing I've seen all day. He has the runs too and loves peanuts so there were little pieces of peanut all over his ass. That Verona is going to be on stage some day, he's got an even better sense of humor than your Animal does, baby.

Anyway, I got to go, Mud Dog is landing and he wants to shoot up some gomers so he can recommend himself for another silver star or something. I've been thinking about your mom. It's weird. Do you think she would be willing to drop a loaf on my face while you massage my prostate when I come home on leave? Just a thought.

1st Lieutenant William Calley was the only person involved in the massacre found guilty during court-martial proceedings. He was sentenced to a life of hard labor, but President Nixon intervened the day after his sentencing and ordered him released from prison and confined to quarters pending appeal. Calley's sentence was eventually reduced to 3 ½ years of quarters confinement. Others charged, including Captain Medina who committed a number of atrocities including the execution of an unarmed woman carrying medicine with two shots to her head, were acquitted during court-martial proceedings. The Americal Division was later disbanded because of the stigma attached following the My Lai massacre's portrayal in the Western media.

Pilot Hugh Thompson Jr. and others who intervened to prevent further bloodshed were awarded the Soldier's Medal in 1998 for bravery outside of combat with the enemy. Not a single shot was fired at the members of Charlie Company as they conducted their sweep of My Lai.