Much Ado about Music

EMI and Sony BMG took a flying leap off the top rope of copyright protection and fell flat on their face. In an effort to stop kids from listening to music, these companies have started to make use of technology that limits the amount and types of formats that can be used to copy your music to. This technology is called DRM, or Destructive Robot Mastodons. Reports have been made that these tiny mastodons keep your little pointer from being able to poke at the music and make it turn into what you want it to. That's unless you use some of those little animated custom cursors because Mastodons are afraid of mice.

There's been a lot of upheaval over the use of these issues in the news lately. Pizzaz, the Current CEO of Sony and lead singer of the band "The Misfits" had this to say about their recent use of DRM in CD manufacturing:

"We spent a lot of money producing these albums for our artists and they deserve money for their work. I'll have a double latte with cinnamon, and you better make it the right way this time." She said to me then added, "And stop talking to me."

The measures currently being used by big record only annoy customers and reduce overall sales. How do we, and by we I mean they, go about changing the way we listen to music so that they can make money? So far we only have a system where we pay and it involves voodoo and Apple computers. I don't know because I cannot afford apples nor computers nor those little crackers you put in your coffee.

All of this doesn't matter because in the future these types of methods will be looked back upon and laughed at like someone who only owns a single iPod. And this single, sad little iPod gets plugged into their sad and single little iCar. Remember, this is the future so their car probably has a firewire plug-in so it fits snugly into a two port garage. But we're getting off of the point, which is that technology is not here to make people's lives easier, but more frustrating. Frustrating for hackers and regular consumers to play this music and steal it with their grubby little hands that have eyes on the fingertips or is it this stuff I just took oh god my skin feels like it's on fire and the pills that my doctor gives me don't help at all why can't I stop crying.

The direction that this technology needs to be taken can only be explained by Peter Lee, an executive at Disney.

"If consumers even know there's a DRM, what it is, and how it works, we've already failed."

This is a war. We use real bullets called words. And above all, remember that the enemy is you. Make sure you don't fire until you see the whites of your own eyes. Have you ever seen your best friend get his arm shot off by a subpoena? Have you ever reached over to pat your commanding officer on the arm and realize his head has been cut in half by a couple of misplaced and irate quotations? Think about how horrible this is, multiply it by ten, now realize it's all your fault. 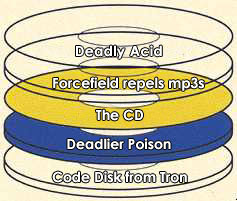 This is the present or future of the CD.

To fight off these hungry ears with teeth we need harsher punishments for people who steal our precious plastic donuts. Instead of just fining them, a sentence is needed. You should make them go to jail as well. You feel like stealing a little pop music? Have fun asking Bubba what kind of bands he listens to. They'll probably suck because he's in prison. Ten to twenty years in prison per mp3, minimum. If they like rap that talks about spending time in the hokey, they can go right ahead and experience it themselves. Then we can sign them to our label.

But jail is too good for these mongrels. Have you ever seen the movie Rollerball? Good, cause it is terrible. But my concept is pretty much the same as that movie. The people who steal mp3s should be put into a pit full of cannibals and lesbians who share your organs with anyone who wants them. When you share someone's organs enough they will learn not to share people's belongings. Have you ever heard of Pavlov's dogs? I have an album of theirs back at my place if you want a copy. You do? Oh, I'll go get it. That's after I share your organs with my friend Kristy who is a lesbian.

But this has all been said on the news. What you, the vilest yet most precious resource of the business world has, need to be at the cusp of all things cuspable.

Pizzaz, the Current CEO of Sony in the year 2050 (the future) and lead singer of the band "The Misfits", had this to say about what should be done with DRM:

"The people who buy our music should be ready to cram it up their you-know-whats." But before I could ask her what she meant I figured out she wasn't really there, but was a cardboard cut out attached to a bomb. Then she blew up the bomb and the windows exploded and it was all "To be continued?" which sucks because I don't know if I can wait that long.

If you want to stop people from using CDs in ways they shouldn't, these companies have to realize you need to get rough. Make it use GPS so that the disc literally explodes when taken so far away from the record shop in which it was bought. Make it release a nerve gas that turns everyone in the room into a liberal. Have each disc contain a picture of the person who buys it and every time you copy the music from it the disc cracks a little and hurts the consumer like a little voodoo doll. The best defense has always been offense, unless you are the Detroit lions because oh god they suck. See, I'm a funny guy who likes sports and doesn't spend all day reading books. 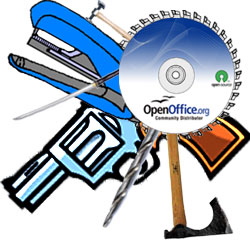 This definitely is the future of the CD.

But all of this might hurt sales in some way, how I cannot say. The little man I drew on my hand informed me with great certainty that this type of intellectual revolution is something the world is not ready for, so we may need to figure out new angles to sell these CDs with. Security comes with a price, and lots of people will not be willing to pay this price to buy our special brand CD players that attach to your skin and drill holes in you if you copy files illegally. My right hand man tells me that all of these features that are going to be added will make a CD unplayable. This is true. Some people will look at these suggested types of business models and consider them to be uncaring, unfeeling, or unexpurgated. All of these comments are made by people who don't understand how business works. First you ask me to do something for you. Then I ask you to sign a contract. Then I do what you asked me to do whenever I want to because you signed a slice of ham, and everyone knows that hams aren't legally binding. See how easily fooled you are? Leave this type of stuff to the big boys, buddy. We'll be doing this type of stuff forever, which includes the future.

But where will DRM really take us? In the year 5020 (the past), Pizzaz, the Arch Deacon of Sony and lead singer of the band "The Misfits" made further comments about the future of DRM use:

"In the future, which happens to be right now, we plan on developing DRM technology. How much? A lot. What kind of things will we be doing? I have no clue, but I hear it's pretty sweet. Will it work and not be cracked within two hours? That's something I'll have to actually do some reading on."

Now that all of you are prepared for the future of DRM, please visit your Apple iTunes store, pick up some music, and remember never to cross the people who provide you those little floating notes. Or those floating notes will grow fangs and eyes and rip into your flesh, you sunshine thief.

This is where the Daily Dirt goes.