America the Quite Nice 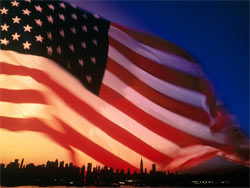 America the rather pretty.America has some problems. This great and verdant land is not perfect. I don't expect any disagreement from that and I don't think anyone will find it a startling revelation. Every day people from every side of the political spectrum are pointing to things that are wrong with America. Some folks hate homosexuals, some hate fundamentalist Christians, some hate abortion, some love it like it was free money, some hate Eskimos and of course the fucking 'kimos hate just about everything. There would be no point served by writing a weepy article imploring people to overcome their differences. I'm not suggesting compromise, I want to take a moment to put aside all those things that drive us crazy and reflect on the great things about America.

This all goes double for the Europeans reading this article. Guys, I'm not going to apologize for anything, but I do understand why we drive you crazy at times. Just forget about those things now and let me tell you about some of the quite nice aspects of the United States.

Starting things off, we've got cowboys. Forget about George W. Bush because he's just a guy from Connecticut in a cowboy hat. Whatever you think of him the way he acts is not representative of real cowboys. Heck, a census conducted in 2002 showed that there are only 18 cowboys still living in the United States. I'm pretty sure Bush checked "president" rather than "cowboy" on that census survey. 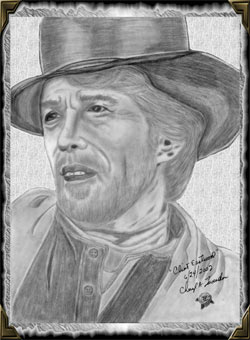 One well-known cowboy is Clint Eastwood, pictured here in a master artist's sketch.Cowboys are a dying breed, but like the Chinese tiger or the Black Forest cuckoo clock, their spirit will live on in the culture of the nation they inhabited. For hundreds of years they roamed the Great Plains of the United States in packs known as "posses" and they meted out justice to a particularly scurrilous species of outlaws known as "rustlers." The exact reason for this rivalry is lost to the hoary pages of history, but we do know that the cowboys won and through their efforts exterminated the last of the rustlers.

Cowboys looked and lived much like you or I do. They didn't have cell phones or laptop computers, but instead they had very special hats and the rudimentary beginnings of early language. They lived as nomads, relying on their appaloosa creatures to convey them from place to place. As a means to control these feral monsters the cowboys wore saw blades mounted on their boots. When the appaloosa failed to obey their spoken commands the cowboy would activate the saw blade and cut bleeding runnels into the creature's flanks.

Particularly brave cowboys also sometimes dealt with the Indians: hideous troglodytes with saucer-sized red eyes and the strength of a mountain bear. The Indians were simple creatures who respected only strength and the cowboys sometimes failed to impress these marauders and were dragged to their boggy lairs. Unfortunate cowboys dragged to these blasted places were forced to mate again and again with the females of the tribe until the Indians had bred out many of the features that marked them as inhuman. This mixing of cowboy and Indian genetics allowed the Indians to gradually evolve and leave the swamps to carefully prepared habitats known as "reservations."

Though still possessed of simian intellect, the Indians fought rarely again with the cowboys and were allowed to put their queer grasp of numbers to use in great mathematic parlors known as "casinos" or "counting yurts" in English. The Indians you might encounter today - though surely as terrifying as a poltergeist - are truly more cowboy than Indian. They have only the faintest remnants of their twisted Neanderthal ancestors visible in their prominent brows and predilection for the lesser vices of alcohol and long division. 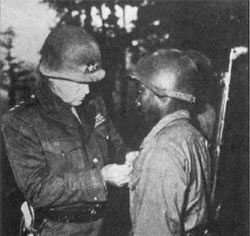 Patton prepares to take the heart of a negro soldier whose uniform was not up to muster.A thousand years from now - after the first and second invasion fleets of the Mugatar Empire have been repulsed - people will still be wearing Stetsons and boots with spurs. Maybe only in futuristic gay bars and cowboy reenactment camps, but they'll still be around. The adventuring spirit and rugged lifestyle will be honored by an oily shirtless guy named Keith and some even oilier fat guys shooting blanks at each other in a national park.

By no means are cowboys the only great thing about these United States. Pretty much every nation has a hero or two, but none has ever made the world tremble quite like General George S. Patton. When the United States was drawn into World War II because of an underhanded attack by the Japanese, George S. Patton led the armies of America into battle. He nailed the Nips, he fried fritz and when the war was all over he started in on the commies and he cooked them too. With all of his enemies defeated, General Patton grew restless.

Fearing that he might turn on his countrymen out of idleness like a caged lion turns on its jockey, President John F. Kennedy ordered Patton to invade heaven. A mighty army was assembled and loaded into rockets and Patton assumed his position in his command rocket. The countdown began and with a war yawp Patton blasted into the sky. The other rockets remained on their launch pads. Made of wood and tin they were merely meant to appear as though they might carry the invasion force. Realizing he had been deceived, Patton transmitted a single curse back to mission control in Houston so astonishingly terrible that it exploded the brain of the man who received it. The rocket blasted Patton into the sun in the hopes that the great furnace's immense heat and gravity might contain the general until such a time as science could develop a means of permanently destroying him. 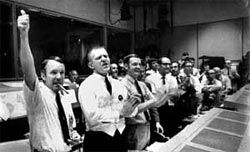 Mission Control cheers at the news that Patton is approaching solar entry.Although America lives in fear of Patton's return from the sun, he is still so revered that on August 15th of each year Patton Day is celebrated. In the 1970s a movie was filmed about Patton and such was the aura surrounding the general that America actually re-invaded Germany with vintage equipment just to get the proper footage. When the movie was released the man who played Patton (named Oscar C. Scott) was dipped in molten gold to preserve him. An entire awards foundation was created in his honor as no actor could ever surpass the man who played Patton. You might have heard of these awards, they are called the Daytime Emmy Awards.

I would be remiss if I talked about the greatness of the United States without mentioning some of the natural splendor here. The Grand Canyon, a rift in Arizona that spans nearly thirty miles and allows one to gaze down into the pyroclastic innards of the earth itself, was once described by famous American author Samuel Clemens as "the great cunt what shit out this awful bitch of a country." It is so large and plunges so deep into the earth's crust that many scientists believe that the continental mass is slowly being pulled into it. One day, perhaps 100 years or one trillion years from now, the entire continent of North America will be pulled into the Grand Canyon and, if theory holds, emerge deep beneath the ocean somewhere near Australia.

The Talking Mesas (also of Arizona) are another famous natural attraction that will leave visitors both amazed and confounded. Wind erosion in the barren desert is so rapid that the huge sandstone mesas are constantly shifting and changing. As they do the wind whips through natural channels creating haunting basso profundo voices that speak in clear English about an ever-changing series of topics. In his book, "The Words of the Wind," James Conroe describes the mesas conversing for three months straight about the American Civil War. They delved into famous personalities, important battles and specified the beginning and the end of the war as well as the Union victory. The amazing thing? Conroe's book was written in 1924, almost 70 years before the Civil War! 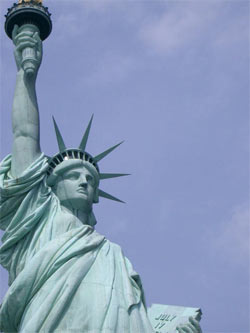 It was the French who gave us this wonder, but it was God who gave us the milk.The Statue of Liberty - Ejects breast milk twice daily for the poor and once nursed a giant ape to maturity.

Doug and Dana Dougherty - They are the only known mixed-sex identical twins. When Doug was killed in an automobile accident in 1988 Dana had all of her limbs on the left side of her body amputated and replaced with Doug's. She can be viewed, still living, at the Smithsonian in Washington, D.C.

The Washington Monument - Conceals the world's most powerful telescope.

Chicago Style Pizza - When made correctly it will cause 6-hour bouts of priapism.

George Washington - Could cure leprosy with an open-mouth kiss.

The CH-85 Mountain Lifter - The world's largest helicopter has been used to move entire cities, as witnessed most recently when it transplanted all of New Orleans to the Canadian border.

Rick Santorum's Stillborn Son - After the in utero death of his 20-week old fetus son, Santorum brought Gabriel home and then had his corpse rushed to a preservation specialist. Following Gabriel's plasticization process, Santorum uses the fetus (with ceramic angel's wings and self-illuminating halo) to top the Christmas tree every year outside the White House.

A. Cognesenti - This unusual furry amphibian biped, also known as "Armstrong's Sherpa," was felled by Neil Armstrong with a great sword during his first mission to the moon. Its preserved cadaver remains available for public viewing along with the original Constitution and Declaration of Independence.

The TRL Studio - The miracle oracle whose seers determine the futures of kings and nations from a simple telephone call.

The Hoover Dam - A parabolic furnace which generates limitless power from the souls of those who died during its construction. Its infernal mechanisms are cooled by the Colorado River.

Niagara Falls - The scenic location of the signing of the Canadian-American Accord following America's defeat at the battle of Black Island. The treaty specifies that hostilities between the two nations would be set aside for 1,000 years, though border skirmishes continue to this day.

The Harry Potter Museum - A museum in Seattle dedicated to the greatest wizard to have ever been raped by an orc in a "Lord of the Rings" slash crossover fanfic.

The Beastie Boys - Once released a tribute album for Tibet that consisted of 72 minutes of them saying each other's names set to music. Three singles stayed at number one on the Billboard charts for a combined length of 124 weeks.

The USS Michael Badnarik - This modern fast attack destroyer's unconventional hull makes it completely invisible to registered voters. It also has the only ship's infirmary in the entire US Navy in which the injured are expected to perform surgical operations on themselves.

I could go on for hundreds of pages. Despite its flaws and foibles there is a lot to love about the United Sates. I would go so far as to say that it's vastly superior to every other country on earth. Who can compete? Europe? Decaying. The Middle East? A war torn hellhole. Africa? More like AIDSfrica. India or China? Too many people and their people are genetically inferior. Japan? Comical inhuman miniatures, like when a dog thinks it's people. So get over yourselves world, because you all suck and we don't. Get over it and, if you could, come visit our splendor because our economy is not doing too great right now.