You're Gonna Love This One...

Think double. Think twins. Twins 2, only this time, they have narcolepsy and they are Siamese twins. Maybe Kurt Russell and Patrick Swayze or you could go with Martin Lawrence and David Hyde Pearce. So they have narcolepsy, but like only one can have it at a time, so while one is asleep the other one has to drag him around all the time. Here's the thing though: one is a homicide detective and the other is a serial killer. The detective is on the case of himself. Well, like, not himself but his attached twin brother. And so at the end there could be this big confrontation in like a warehouse and the killer could have a gun but he gives the gun to the cop twin and then like the cop twin uses the gun to shoot them down the middle so they fall in half and then he arrests the other twin.

You could play it for laughs or, oh, okay, you don't like that one. That's fine, they don't call me "The Idea King" for nothing. Yes, they do. Well, you wouldn't know them. Okay, my mom came up with the name.

Forget about that. I want you to picture a car. Like a stock car from NASCAR only without all the decals. Then I want you to picture that car hitting an old lady as she is crossing the road. It kills her. Now I want you to picture that old lady's ghost flying into the car. Okay, so her ghost is haunting the car, right? Now, her grandson is a down-on-his-luck racecar driver who mortgages his house to buy a used NASCAR car. He goes to a police auction and buys this car his grandma is haunting and she talks to him through the radio. Together they win the race but then at the end he wrecks the car and he can see her as her ghost flies out of the radiator and goes into heaven. It will be a family picture, fun for everyone. You like the red state appeal? Oh, really? I thought they were called "stock cars" because they were just completely normal cars. Okay, scratch that one then, but I've got another good one. 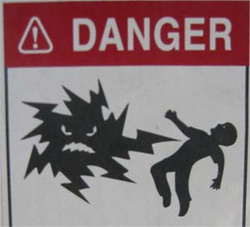 Alright, there are these gay guys who are running this movie company called M.E. Phistopholes Pictures and they have this party where they do things that are so gay that they actually invent a new version of AIDS. This version of AIDS is different because it can inhabit electrical appliances, travel along power lines, and most importantly it can kill heterosexuals. So there is this electrician guy who goes to work on the wiring at the M.E. Phistopholes building and this electrical AIDS monster starts chasing him. Like it will make shit explode and appear on TV screens and taunt him. The monster tries to kill him over and over again but the guy uses his electrical knowledge and prayer to fight it off. Finally it traps him and his family in a church and it inhabits the wiring there but by praying at the altar he manages to trap the AIDS monster inside an extension cord that he throws into a lake. Then he goes home and it seems like a happy ending but then we go back to the lake and there are these two guys totally being gay with each other in the water of the lake and the camera goes down under water and we see the lightning AIDS shoot out and hit a fish. Like for a sequel.

No? Too controversial? Right. That's understandable. I've got plenty more though.

Okay, open on the Washington monument. The sun is setting in the background, children are laughing and playing around it and tourists are marveling at its majesty. Then KA-BLAM! A huge explosion levels the monument! Then cut to Big Ben in England. The clock strikes one and the bell starts ringing and then BLAMMO! Another huge explosion. By now the audience is trying to guess who is causing all of the devastation. Then we see the Eiffel Tower and some FBI guys are running up the stairs. They are chasing someone, who are they chasing? Osama Bin Laden! This will be great if we can get it out there in time to catch the Osama wave. I'm thinking like "Bin Laden: Rogue of Nations" or "Bin Laden's Revenge." For what? Well, he's getting revenge for America attacking him or something.

Fine, fine. How about this?

How about a nerdy kid who lives with his aunt and uncle. He is smart but he doesn't have many friends other than the smoking hot next door neighbor girl. So he is on a class trip one day and this radioactive spider gets loose in the museum and bites him. What the kid thought was an annoying bite turns out to be a life changing event that gives him magical powers! He can climb tall buildings, he has superhuman strength and endurance, and he can shoot cobwebs out of his hands. So he decides to use- what? No! This is based on a short story I wrote my sophomore year at college. Fine, but I think you're missing out on a smash hit with that one. 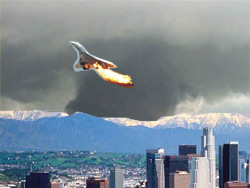 Let's see what else I've got for you…

A-ha! Here we go. You're gonna love this one, it's called "Super Tornado." No, wait, just hear me out, you're going to jump at the chance to buy this one. So there is this guy who is a professional weather fighter. He and his team of misfits travel around the globe in a special storm-resistant jet plane and duke it out with storms using all kinds of lasers and weird high-tech gadgets. Like maybe they use some sort of net to stop an earthquake or a bomb in midair to alter the course of a hurricane. So the movie opens with these guys battling a volcano with high-pressure hoses and freeze beams and stuff, but the volcano is too big and it kills most of them except for the grizzled veteran leader of the team.

He goes into retirement, but then like five years later NASA detects a meteor coming close to earth that is going to cause gravity anomalies that create the biggest tornado ever right over Los Angeles! The weather fighter unwillingly comes out of retirement for one last mission to help the government form a team that can stop the super tornado. This tornado will be awesome. Like it goes all the way up into space and maybe there could be like the moon caught at the top spinning around and around in the super tornado. In the end they will stop the tornado but the veteran will sacrifice himself by flying his old jet plane with an atomic bomb on it right into the middle of the tornado and it blows it up. I'm thinking Bruckheimer with maybe Ridley Scott directing. What do you think?

Yeah, okay, pass if you have to. I understand, such a good project could be daunting, but I've got one last project that is going to totally blow your pants off. 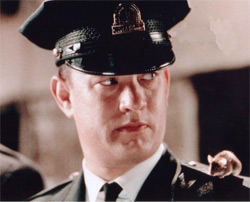 What says "Oscar" more than Tom Hanks? Give up? Ten times the Tom Hanks!

Tom Hanks is a NY city cop who is killed by a drug dealer purely by chance. Like he is eating a pretzel and the drug dealer shoots at someone else and the bullet hits Tom Hanks. So Tom Hanks dies but his record is so exemplary that he gets picked for the ReCop program. They take Tom Hanks' dead body to a secret facility in an underground bunker and using all kinds of computers and cloning chambers they create an unlimited number of Tom Hanks clones AND they bring the original back to life. The problem is that all of the clones go crazy and are really bad cops but they keep getting worse until they are shooting at people.

I understand. I'm sorry to hear you didn't like any of my ideas. I'll be back soon with some more though and these are going to make your brain explode with greatness.

Hey, one more before I go, picture Orlando Bloom as a centaur. He's fighting for his people and- Alright! Alright, I'm going!

Dirt In Your Eye

Hey, I wrote some Daily Dirt and it's Memorial Day so read it and then give a moment of silence because I had to write an ALoD.