How to Horrify Unwanted Guests

Most weekends I consume at least a little alcohol, but I am not one to relate this fact when nothing particularly interesting occurs as a result. I try not to drive under the influence, so I don't have any tragic accidents to report in which I crushed the spine of an 11 year old boy who was looking forward to being a track all star. It has been years since I've indulged in petty theft while intoxicated and even longer since I have endured any of the surreal shenanigans of college keg parties. However - and I am sure the more astute of our readers knew this was coming - this weekend proved to be quite memorable. It will go down in my private records as one of the most disgustingly entertaining weekends of my life, and with a little luck some of you might even recall it an hour or so after reading my recounting of events.

Please allow me to preface this tale by stating that it is more of an example of psychological battery taken to an extreme than it is any sort of physical malfeasance. Like my wife, the sea, I am a cruel mistress and I do not abide unusual or unwelcome guests in my home. 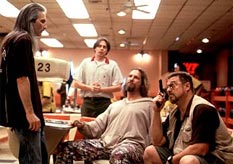 Ja, meine dispatcher says dere is a problem mit deine kable.Yours truly, Dev, Mona, and Ben decided to go bowling and consume large quantities of Sweet Cold Drinks. Mona managed to defeat all who opposed her, scoring something like fifty thousand in the first two frames. Despite attempts to emulate "The Big Lebowski", the group degenerated into a mindset of rowdiness that stood out even in the midst of a white trash bowling alley.

From there the group of hooligans proceeded to a local dining establishment where even more Sweet Cold Drinks were consumed along with whatever food was being deep fried that particular evening. On the way back to my apartment to enjoy more Sweet Cold Drinks in the privacy of my redoubt, a decision was made to stop at a local grocery establishment. At this point things become a bit blurry for the narrator, but suffice it to say that Dev and I hit on a certain grocery clerk by the name of Misty (see cast), inviting her to call us and return to my apartment to enjoy Sweet Cold Drinks. This did not in fact transpire that evening, but still fun was had by all.

The festivities continued on the evening of the 8th of September. Chadly was visiting and the group decided to get some eating out of the way before turning our collective attention to a fresh round of Sweet Cold Drinks. After a delicious dinner at a local semi-Mexican eatery, the group retired to my apartment for cocktails and beers, overly loud rap music, and possibly party games.

Then Misty called. No one was really expecting Misty to call. No one really wanted Misty to call. Despite these two things, Misty was nevertheless calling from her cell phone, en route to my apartment with her friend Jennifer in tow. Dev fielded the call and was reluctant to allow them to swing by, but I encouraged him to invite them over for Sweet Cold Drinks. Regardless of my ulterior motives, Dev complied with the request, talking with the two apparently moronic girls as I began to outline to Mona my plans of "fucking with" two young women silly enough to come to the apartment of someone who tried to pick them up while drunk.

I attempted to assume the persona of Rapier Witt, a piece of eurotrash from the Alsace-Lorraine region who would ineptly attempt to sweep them off their feet by making constant references to chateaus and wineries. Unfortunately, Dev blew my cover when they were not two steps through the door and I was forced to revert to plan B.

I tracked down a blueprint of my apartment at the City Planner's office and inserted photo-realistic renderings of myself, my friends, and the victims.Plan B was "become an insane asshole who doesn't stop talking."

Misty and Jennifer entered the apartment, dangerously young and obviously dressed for the sex. Misty was even wearing a quasi-schoolgirl uniform and eating a sucker. I did not allow the Lolita bus to sidetrack my objective of making girls cry and so I made a casual reference to knockout pills and then offered to fetch them both a drink.

"She's a ho," giggled one, referring to the other.

"Hee hee, she is too," said the other, practically spreading her legs and flying around the room.

"So is Mona," I added in an effort to make them feel uncomfortable, "she hangs out here all the time and we just pass her around. I was pounding away at her yesterday when I called Ben into the room and we double teamed her. We were high-fiving."

A wasteland of absolute silence followed this comment, an atmosphere everyone was to become painfully familiar with in the coming hour. I continued to make references to knockout drugs while offering beverages, Dev began to quiz them on math and word pronunciations.

"What do you call those things that people bring into the grocery store and give you for a discount?" Dev grilled them. "They get them from newspapers sometimes."

"Cue-Pawns," drawled one of the girls, still oblivious to the fact that she had made one of the most embarrassing mistakes of her life by coming to the apartment.

"Good," I commented. "What is that stuff that's like ice cream but it's just blended frozen fruit?"

"Sure-Bert," the other said with a self-satisfied smile.

The topic of conversation was forcibly shifted to relationships and the ever-spry Misty confessed that she spent all her time "on the computer" and that her last two boyfriends had been wooed "on the computer". The many-varied colors of the Interweb rainbow!

"I've had pretty bad experiences with online relationships," I confessed. "I once fell in love with a girl I was talking to on ICQ. Over a period of weeks we became close, until we both came to the conclusion that we were smitten with one another. A meeting was arranged and I went to visit her. She turned out to be a 54 year old Korean man. I let him give me a hand job."

The wonder twins regarded me with horror. 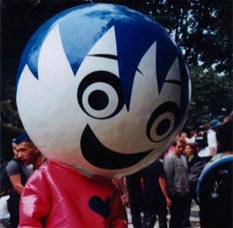 BAM!!! Normally when guests come to my apartment they are treated to a happy face."Oh," I pretended to be embarrassed, "it's okay! I thought about women while he was doing it."

"That was the second time, right?" Ben interjected, playing along.

"No, that was the first," I continued, "I ended up meeting someone else and they turned out to be that Korean guy too. He was wearing a fake beard."

It was at this point, or thereabouts, that Jennifer, who had been growing restless and fidgety under the withering barrage of stupid questions and comments, made a painfully obvious gesture of looking at her watch. I feigned offense immediately, then somewhere in my second or third minute of incredulity over her apparent urge to flee the scene, I turned the gesture around into something I found sexually gratifying.

"Do it again," I coaxed, "look at that watch again baby."

"There," she relented, flicking her eyes to her timepiece nervously.

"No," I shook my head, "that was sidelong; I want a long hot stare at that timepiece of yours."

"No," she averted her eyes from my unwavering gaze.

"Please," I begged, leaning towards her a little, "just look at it, you know you want to."

"It'll be fun. Just look at it once," she was covering the watch with her hand, afraid that if she caught it in her peripheral vision she might make watch-to-eye contact.

"No," she was becoming even more agitated.

"Just fucking look at it," I wasn't backing down. "Move that hand off your watch and just let it fill your vision, let the watch flow through you."

"Shut the fuck up," she snapped.

I leaned back, shifting gears.

"Fine Clocky McTimepiece, I didn't even want to see it anyway," I stretched, "it was just a joke, I don't care about your stupid watch."

These watch games continued for probably four minutes or so. Do not read my account and get the impression that this was casual or flirtatious, on the contrary, it was extremely hostile, disturbing and bizarrely obscene.

Jennifer and Misty stayed for an hour, maybe slightly more or less, but five minutes was past their welcome. The course of the conversation became increasingly threatening, with references made more and more to knockout pills and bodies in the trunk of my car. Dev, Ben and even Chadly made repeated mention of the fact that they were welcome to leave at any time. Eventually they realized that discretion was the better part of valor and accepted these offers to depart.

The moral of the story, if one can even be found in this unsettling tale, is that eighteen year old girls should not accept the invitation of a random stranger to come to their apartment, especially not when it's my fucking apartment.

That Able Joe just never gives up, does he? Let's all try to be a little more like Able Joe, with maybe a dash of the caring Fireman thrown in!