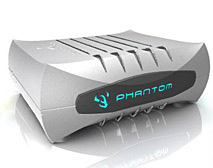 Phantom: The Joke That Writes Itself

The Phantom. For nearly five years the perpetually-in-development console has been the source of many a joke for unoriginal and untalented gaming writers such as myself. Infinium Labs' system promised to deliver pc games to your tv set so you could enjoy them in all their low-resolution glory, to be more powerful than the Incredible Hulk if he produced really great graphics when he hulked out instead of turning green and getting big, and to levitate for unknown reasons. Despite the laughter that erupted at the mere mention of the console and the widely held belief that Infinium Labs was just out to grab money from investors without any actual intent to create a gaming system, they persevered in their efforts to craft the greatest console in gaming history.

According to recently revealed documents, however, out of the 62.7 million dollars Infinium Labs has spent over the years, only $3.5 million has gone to actual product development. That, as we say in the business, is not so good.

With new rumors circulating that Infinium Labs is going to delay or outright cancel the Phantom, the future for this courageous company is uncertain. I for one hope they start work on a handheld system to compete with the Nintendo DS and Sony's PSP. You may scoff at the idea, but don't be surprised when you see sleek renders for the Vapor Anywhere begin to circulate a few months from now.

Bethesda has announced that in two weeks they plan to announce the release date of their highly anticipated PC and Xbox 360 role playing game The Elder Scrolls: Oblivion. An inside source at the company, however, has contacted Video Game Article with information that the two week deadline for the announcement is "just a rough launch window that we'd like to meet", and that the press release does not have a locked feature set, much less an initial check for grammatical and spelling errors.

If and when Bethesda does release an announcement regarding Oblivion's release date, we have been assured that it will be of the highest quality possible and that the public can expect to become lost in the press release for upwards of 100 hours depending on their reading comprehension skills and how many times they read it.

Star Wars: Empire At War
This solid strategy game is the modern equivalent of gathering all your Star Wars figures and having them duke it out, minus the risk of Boba Fett's grappling hook scratching your cornea (unless you're playing the unpatched version). 8/10

Tom Clancy's Rainbow 6: Lockdown
The first iterations of Rainbow Six were some of my favorite games of all time thanks to their strategic depth and slow-paced but tense gameplay, which have presumably been removed in Lockdown to make enough room on the discs for the incredibly uninspiring and forgettable storyline which is a technical achievement in its own right. 3/10

Fight Night Round 3
Watching your punches send ripples through your opponent's face is a lot of fun until you start to think that maybe there are microscopic civilizations living on our skin, and then you realize that you'll never be able to punch them all. 9/10

Full Auto
Who needs a solid framerate or varied environments when you've got cars with guns and stuff that blows up, and please don't answer that! 7/10

Black
Just like shooting people in real life, this visceral game starts out fun but grows tiresome after a few hours, leaving you feeling sort of empty inside and living in Mexico under the name "Malcolm Sideburns". 8/10

Grandia III
Grandia III has one of the greatest battle systems in any rpg to date, but you never get the opportunity to battle the monster who came up with the last few hours of the plot. 7/10

Exit
A surprisingly fun puzzler centered around the concept of guiding people out of danger-filled buildings, this is a must-have for fans of Great White. 8/10

Super Princess Peach
A platformer for those of us who are tired of Mario's overwhelming masculinity, Super Princess Peach is an easy but enjoyable romp featuring a parasol-based fighting system that surpasses the parasol combat in any other game released in 2006. 8/10

Hi there game boys and game girls! You might remember me as the Rumor Dude from my stints in Electronic Games Magazine and GameBro, where I predicted that every marginally successful game was going to have a sequel and revealed top secret information that Nintendo planned to make a new system after the SNES, after the N64, then once again after the Gamecube. The Rumor Dude had a great run in those mags, but Video Game Article has now snatched up the Rumor Dude to write exclusively for them from now on! For those of you who don't know me, the Rumor Dude is an industry insider with contacts deep within every game studio in the world and the Rumor Dude possesses an uncanny ability to predict the future when it comes to video games. Every month I (the Rumor Dude) will stop by with the latest scoops and rumors, dishing out the dirt by the dishful!

Let's dive in, shall we?

The Revolution hasn't even launched yet, but my sources at Nintendo tell me that they're already thinking about making another console. You heard it here first, folks! From what I've gathered, this next-next-gen system is codenamed "Oedipus" and it will feature a game starring a certain Italian in a red hat. (Mario)

A little birdie tells me that Diablo 3 is finally in development, and that long-time fans of the series will be thrilled to hear about some new additions to the series. The randomized item system (which, let's face it, was too random for most gamers to really enjoy) has been completely removed and replaced with a system where every enemy you defeat simply drops gold or an IOU. Since the character you choose (Male Adventurer or Female Adventurer) is bound to the equipment they start with at the beginning of the game and you can't buy new items, amassing a fortune should be much easier this time around. As a response to the tragedies of Columbine, 9/11, and the Challenger shuttle, all Satanic imagery has been pulled from the game in favor of a sort of leather biker theme that's kind of hard to describe unil you see it. And yes, the series will finally make the move into full 3d, provided you wear the included red and blue glasses.

Nothing has been made official, but given the popularity of Madden NFL 2006, I predict that EA Sports will get to work on a sequel within the next few years. Gotta strike while that iron's hot!

Very reliable sources have confirmed that Wil Wright, the legendary creator of The Sims and the upcoming Spore, plans to announce his support of breakfast during the keynote speech at this year's Electronic Entertainment Expo. The move is not a publicity stunt, as those of us inside the industry know firsthand that Wil's enthusiasm for the first meal of the day is genuine. He is often seen eating cereal or speaking about the meal with great fervor and animated arm movements. Sometimes he gets a far away look in his eye and you just know he's thinking about breakfast. The announcement might ruffle the feathers of radical anti-breakfast groups, but hopefully those who disagree with him can look past his personal views and still appreciate his creative talents.

Early sales reports indicate that Star Wars: Empire At War is selling like hot R2 units on Tatooine, certifying it as a big hit. Internal sources have revealed to me that an expansion pack was already in the planning stages but it has now been officially greenlighted. Titled Star Wars: Empire At Peace, it will feature new levels and units which are primarily nap-based in nature, with a few stealth segments where you must sneak up on neutral units and hug them or give them a high five. Use this information carefully, as many Bothans died to bring it to us! Star Wars!

That's all I've got for now, but come back next time for some surprising news about Nintendo's Revolution possibly using some sort of gyroscopic control scheme!