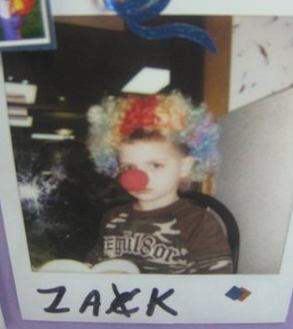 Of course the Burger King matched the town in quality and smell. The interior was to architecture and design like an advanced case of cancer is to a human. Everything was breaking or rotting, and the owners had given up all hope long, long ago. Zak's birthday celebration was spent among shriveled lettuce on the floor, cardboard crowns, and the remnants of the discontinued Kid's Club. A grease-stained cutout of Kid Vid stood by the register in a totally rad pose, but all Zak could do was stare off in the distance while some obese dude in a two-bit clown costume tried to take his picture.

When Zak blew out the candle, he made a wish. He wanted the ability to see into the future, and for a few moments it came true and he stared ahead with dead eyes and saw the terrible life that awaits him. He saw that while other kids catch Pokemon on a new console, Zak will get meningitis. By twelve, his mother's food stamps will be diverted for cases of Busch. His virginity will slip away sometime during his late teens and be replaced with open sores. Zak knows all this in his foam nose and rainbow wig.

What he wouldn't see is the optimism in the whole situation. His terrible childhood will have him entirely desensitized by his twenties. Like an Internet user that has seen goatse one too many times, Zak is dead inside. On some winter night thirty years from now, he'll buy a crave case from White Castle. He'll take it back to his trailer or government assisted apartment and set the case on the floor in his kitchen for a second while he fumbles through the fridge for another beer. Disoriented, Zak will stumble a few steps before planting a foot squarely in the middle of the thirty Sliders. A soft squirt of meat and cheese will ooze out the side as he gains his balance. A normal, adjusted man would take one look at his ruined dinner and find something else to eat. They would understand that the only thing more pathetic than eating White Castle alone would be to ruin your meal first. But not Zak. During his childhood, he hit rock bottom so hard that he broke his legs, and he never tried to crawl up and out. No, he won't throw the mess out, instead he'll open the case and see the crushed, dripping, smashed line that had once been thirty miniature cheeseburgers and start forking pieces out unfazed. Thanks mom.

Maybe we have the whole picture wrong. Maybe this is a good party. Maybe the message on his camouflage sweatshirt that reads "EGUL SOR," isn't some sort of poorly translated American symbolism, but instead a piece of meta-commentary in regard to the country's freakish national pride and poor education. Maybe he keeps the full set of cement deer and geese that clutter his front yard as an ironic joke. Maybe Zak is having the time of his life; and despite all the joy, he has managed to put on a stoic face for the camera.

No. Nope. No way. Zak's suffering is pure and permanent. But chin up, don't worry about him. Someday he'll SOR like an EGUL into the NASCAR circuit or prison or wherever all the forgotten children of Americana end up.