> >tell him exactly where your family is

You tell the strange man where to find your step-father. He smiles, and you feel yourself compelled to leave your computer and walk into the living room.

Your apartment seems to have transformed into a very similar forest as that in the Bendyman game.

As you approach the couch, your step-father coughs and hurriedly stuffs something into the cushions.

He squints his eyes, examining your face. "Whoa, wanna play cowboys and indians? I never got to play that with my dad," he mentions wistfully,

"You know what to do," breathes the suited GHOST who follows behind you.

> Do the thing that we must do

> Take him up on his offer. Cowboys and Indians sounds fun.

>Time jump: 32 hours into the future
>Switch characters to Detective Neo Noir
>Stare at the dead family in the crime scene in front of you, mumble, "Eight case like this in the last two weeks. All these kids killing their famil, madness." and light a cig.

"There's uh.... no smoking in here, Detective," says the officer in uniform cautiously.

You survey the area, take a deep drag, and shake your head. It looks like a stuck pig ran around doing cartwheels before exploding with a belly full of cranberries. You've got a funny feeling you won't be getting any sleep tonight, either.


"This is just like the last one. Thank God the mother wasn't home yet. Any word on the kid?"


The officer shakes his head, "Nothing... it's like he just, disappeared. Strangest thing I've ever seen." He takes his hat off and wipes the sweat from his brow.

> excuse yourself to the restroom, take off all the clothes underneath your trenchcoat, and come back and pretend that nothing happened while you were gone

> >Go to the computer, then ask the people still watching the livestream after all this time what happened.

The officer raises his eyebrow as you exit the restroom. "Uhh, shouldn't you be wearing your shoes in the crimescene?"

You give him a look as if he is the dumbest person on earth, "This is my method. I need to get inside his mind." 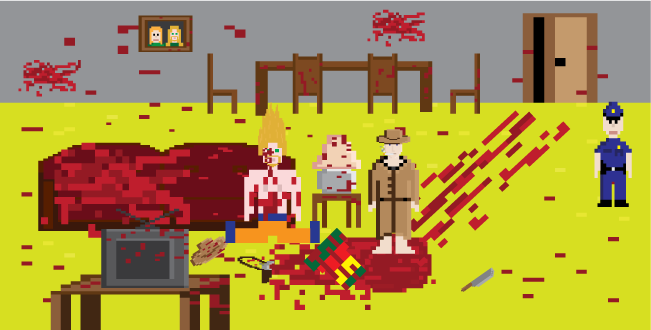 You rummage through the closets and dresser drawers until you find a pair of bright orange sweatpants. Propping the corpse of the step-father against the couch, you undress him. The limbs are stiff and cold with the onset of rigor mortis, but you manage to slip the sweatpants over his legs. Using hair gel you found in the bathroom, you spike his hair unnaturally above his head as if he were the bride of Frankenstein.

"Ok, I really don't think you should be doing that," says the officer in a disapproving tone.


"This is way above your level, uniform," you shake your head and take a drag from the cigarette. "You should be taking notes. I'm gonna catch this guy if it's the last thing I do." 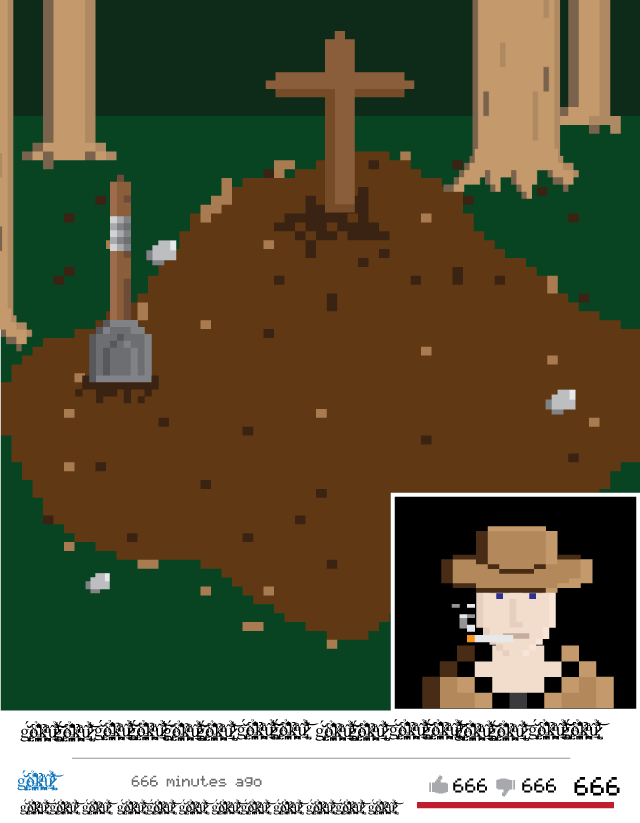 You follow the blood trail into the boy's room and find his computer still powered on. A strange video game is currently running. You sit down at the chair and see yourself in the middle of a poorly rendered forest, staring at a large patch of loose dirt with a shovel sticking out of it. All is quiet but for the sound of a heartbeat.

> ask anyone still viewing the stream if they saw anything unusual

It looks like the boy was broadcasting this video game over the internet at the time of the crime. You think it still is, but can't be sure.

You ask out loud if anyone is listening.

"Hello, Neo," responds a calm, pleasant voice. A voice that seems familiar. A little... too familiar.


"It's been a long time. Do you miss your parents?"

Your heart drops into your stomach like a lead anchor covered in fishing weights on Jupiter.

In the video game, thunder echoes in the distance.