Griefers Have Feelings Too 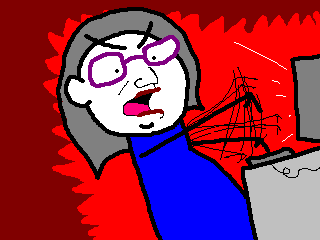 ARGH _fcksavedurl=There are a lot of blogs about Second Life, but one in particular is considered the "premier digital journal for virtual worlds." Being recognized as the best Second Life blog is a bit of a backhanded compliment, like medaling at the Special Olympics or being named the sexiest forum goon. The superlative presupposes a disability, and it removes all feeling of accomplishment, like when you're eleven and you realize hey, even the autistic kid who struck out every time got a trophy for playing Little League.

Nevertheless, if you're judging by academic pedigree I suppose TerraNova is the pampered poodle of the bunch. It's run by a group of professors who write sophisticated sounding articles like "MMO's As Rituals" and "Discipline and Pwnage."

For the Goons, it's Goon culture that comes first, and game culture a not-very-close second. Is this somehow a failing of the games currently available? Is it a mark of how strong the SA culture actually is? Outrageousness aside, is this a desirable condition for a meta-guild? If so, is it something developers could build for or seek somehow to promote? Or would that merely extend the boundaries, and necessitate even more creativity from those who will always seek to bring something more to a virtual world than the world itself could ever offer?

The first thing I did after reading this post was check my meta-guild meter to see just how attuned I was to the vagaries of the greater goon community. The second thing was to read the 269 comments appended to the post. Some of my favorites include:

However, if you read all those comments--and if one of your job requirements is to keep track of Second Life dramabombs--you'll begin to realize that goons are, well, misunderstood.

We're cast as a culture that loves to inflict misery on others. Heartless, motherless bastards who lack any capability for empathy or compassion. Now, I know damn well that isn't true. Griefers have feelings too, and each and every one of us is someone's baby. And to prove it, this week's video is an unprecedented peek at how baby griefers come to be. Maybe, once these people understand from whence we come, they will understand what we do.