Unfortunately the AI is an area where 2K Australia overpromised and underdelivered. During the months leading up to release day the developers delivered trailer after trailer showcasing the potential of the AI. One trailer shows the player setting Slicers on fire who then frantically find water to douse themselves in. It's obvious now that these scenes were scripted. Set a Slicer on fire in the game and he'll run into walls, get stuck on geometry, or just stand there staring at a vending machine. 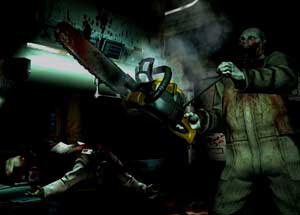 Bioshock is a fun little diversion, not the artistic breakthrough the industry has been waiting for.The stupid AI makes the game all too easy. Sure there are awesome weapons and plasmids at your disposal, but one could conceivably beat the entire game with a pistol. Strewn about the madman's mansion are vending machines that allow the player to upgrade their weapons and spells, but why bother if you don't even need them? The re-spawn system doesn't help in the difficulty department either.

Death is handled very differently in Bioshock. In short, you don't die. Once the player loses all their health they are teleported to a "VitaMachine" where they are patched up and sent right back into the fray with full health and mana. The enemies will retain the same amount of damage allowing the player to chip away at them without having to formulate a strategy to keep from losing life. Without a penalty for dying there is no tension or feeling of danger anywhere in this title. An experienced player will probably blast through the game in about 6 hours, 4 hours if they take their time.

I'm no prude but I did have a real problem with one aspect of Bioshock's gameplay. In order to increase your character's abilities and magical attacks you must fight and kill little girls known as Little Sisters who hold secret powers called "Eve". I wish 2K had made this part of the game optional or worked harder to find a different way to upgrade your character.

The gaming industry is already under fire as it is and Bioshock only adds fuel to the ever increasing anti-video game fire. Even as a gamer and staunch supporter of freedom of speech, I found myself uneasy killing the Little Sisters to the point where I became disgusted and stopped playing. Hopefully this aspect of the game will be addressed in the sequel or a patch.

One area where Bioshock excels at is audio. Featuring 6.1 stereo surround sound, this is one game you'll want to crank up to 11. The City of Raptor rustles and bustles with ambient sound effects such as creaking pipes, dying moans, creepy footsteps, and the ever present sound of rushing water. To get the most out of Bioshock's excellent sound design you'll want to pick up some Monster Cables and Bose speakers for that extra oomph. This game demands it.

Which version to get?

Bioshock is only being released on two platforms, the Xbox 360 and the PC (with a PS3 release to come later this year). This leaves many gamers to wonder, "Which version do I get?" Built from the ground up on the Xbox 360, Bioshock is a console game at heart. The control scheme handles fluidly on the 360 but flounders on the PC. I wouldn't call the PC version unplayable, but you'll find yourself turning down the difficulty to compensate for the loss of control.

Graphically the two versions are virtually identical but the 360 has the upper hand in this reviewer's opinion. Because the game has to run on a wide variety of computer configurations the graphics have been dumbed down for the lowest common denominator. The Xbox 360 only has one configuration and 2K Australia has really tapped into that power to deliver a superior experience.

While the PC visuals are okay, they come at a price however. Because of the game's extensive water and shader effects, PC users will require a video card capable of Shader Model 3.0 and DirectX 10. These video cards often cost more than a single Xbox 360 and don't deliver visuals nearly as crisp. It's just not a smart buy. 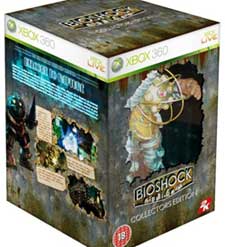 For about $20 more Bioshock is also available in a special collector's edition that includes the game, a making of DVD, a soundtrack CD, and an art book.At press time Bioshock has shipped with no more than 100 major bugs and glitches. From broken authentication servers to certain drivers causing 4:3 monitors to display the visuals incorrectly, getting the PC version up and running is an exercise in frustration. Many of these bugs were present in the Xbox 360 version but have since been patched for Xbox Live users. PC users however are up a creek without a paddle, with no fixes in sight. If this is the kind of support we hardcore PC gamers receive, no wonder gamers are deserting the PC and hopping on the console bandwagon.

While the PC version is still a quality title, if you have the right hardware you'll be doing yourself a favor picking up the Xbox 360 version instead. It features Xbox Live support, achievements, and a friends list to track your buddy's progress, as well as your own.

Hype is a double edged sword. On one hand hype can create tremendous demand for a publisher's game to the point where gamers are clawing over their own grandmother just to get a copy. On the other hand unchecked hype can be detrimental to a game's success. Word of mouth soon spreads and by the time gamers realize that the game is a dud, many have already been suckered into buying it.

It's our job at Truth Media to cut through that hype and deliver an objective and factual judgment of a game based on its own merits. You will never see us take a bribe to give a game a higher score like 75% of the web sites out there. Before you buy a game look for the Truth Media review, not the hype.

More importantly don't buy into 2K Games' hype. Bioshock is a derivative run and gun shooter that is using the legacy of System Shock to sell copies. It is unfortunate that 2K had to lie to its fanbase to get this title out the door.

At the end of the day Bioshock is not the definitive sequel to System Shock that we have been waiting for, that is, until the superior PlayStation 3 version hits stores next Spring with new content and features.