There's Still Room For Mass Effect 3 To Seem Even Dumber

Somewhere at the core of Mass Effect lies the promise of a nuanced adventure in a detailed sci-fi universe. Unfortunately, that promise has been swept aside in codex entries and overheard NPC conversations as the series tightens its desperate embrace of big, dumb action movie conventions. 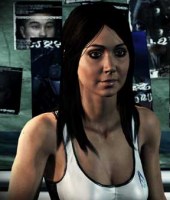 Confidence in BioWare has never fully recovered from Dragon Age II. With "push button get awesome", low effort content hiding behind cinematic spectacle, and increasingly laughable rehashes of the company's long-running awkward romances, they seemed to have shifted away from the craft and substance that defined their success.

Still, some have been willing to chalk Dragon Age II up as a fluke. The game was, after all, created by a team that wouldn't be touching Mass Effect 3. Maybe a bad outing can be an isolated incident rather than a reflection of a changing company.

Then the details began to emerge.

Mass Effect 3 would feature multiplayer and a "fuck the story, let me shoot" mode. Leaked plot points were shockingly stupid, making quantum entanglement teledildonic fan fiction seem reasonable and understated. A game journalist most known for being an attractive woman that once licked a PSP turned out to be a weirdly accurate character model in the game, complete with an outfit that Miranda would have turned down for being too ridiculous.

Mass Effect 3 might not be total shit, but at this point it is safe to say that everything we have heard about it is almost entirely comprised of shit.

That's not to say that BioWare is incapable of delivering twenty hours of engrossing and satisfying sci-fi. It's just that they've already exhausted those twenty hours, then sprinkled them throughout the 200+ hours it takes to play through the Imperial Agent and Smuggler storylines in The Old Republic.

At this point, it's hard to imagine Mass Effect 3 sounding any dumber. That's why I've done the hard work for you. It can always get worse. Here's how.

NeverDead
Clumsy action combined with the worst qualities of modern Japanese game storytelling, topped off with WACKY elements that only sound halfway cool on paper. 5/10

SoulCalibur V
A tense battle to determine what's more bland and vaguely offputting - the characters or the UI. 4/10