Kingdoms Of Amalur: Reckoning makes one hell of a weird first impression. If it was a dude introducing himself at a party, he would be wearing a silk dragon shirt, an inexplicable layer of dampness would cover his entire body, and the first words out of his mouth would be a quote from Stargate SG-1.

After a few minutes of conversation you'd realize the shirt was a loaner, as he'd just saved someone from drowning in the pool. The Stargate quote, well, he's genuinely enthusiastic about SG-1. Still a good guy though. 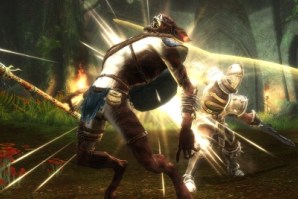 Reckoning's demo makes the odd decision of starting off with the opening scene of Planescape: Torment. You're a dead guy, and your discarded corpse has arisen in some sort of weird laboratory. The specifics are quite different here, but reminding people of one of the most well-written games of all time is probably not a good idea when your story is essentially Fable with less farts and more faerie lore, with a pinch of Drizzt.

You see, there are Bad Guys attacking the lab so you have to leave (after fighting an obligatory boss). Before you go, however, a few characters need to talk to you so they can tell you that you're quite special and also you have no memory. So, you know. It's a video game.

While the plot isn't original the writing itself isn't terrible. You'll never mistake it for nuanced or deep, but it moves things along, occasionally turns out to be funny, and does a good job of expanding upon the world. It occupies the same level as Mass Effect.

That feeling is compounded by the fact that there's a Mass Effect dialog wheel which, for some bizarre reason, requires laser precision to make your selection. After a few lines in the dialog wheel, you'll be dumped to a plain old list of all possible topics. In theory this is great since navigating dialog trees can be a pain, but the awkward transition creates the impression of an indecisive design.

The graphics are colorful, crisp, and lack the smear of vaseline on the camera that the Fable series employed in a misguided attempt to hide its deficiencies. This means that a lot of people on the internet are very angry, because colors and style equate to "cartoony", which is ALWAYS a very bad thing for some reason.

Again, first impressions don't help at all, because the first two characters you see have been imported from the Gnomes folder in the World Of Warcraft model viewer. Beyond that jarring moment, however, the game's graphics are simply fantasy personified, with a clean style that reveals a surprising amount of environmental detail.

Most games are realistic or quasi-realistic, replacing expressive art with pure technical flair. Of all the titles that can be said to have strong art direction, many employ low resolution textures, look like poorly animated Flash games, or obscure the art with too many filters and shaders. Amalur isn't on the level of Uncharted or Mario Galaxy, but it doesn't seem any more worthy of scorn than the sea of games that only reference their concept art while retexturing Everquest 2 models.

Though the beginning of the demo fills you in on basic mechanics, it does not even attempt to hint at the complexity to come. Once you step outside the dungeon things become more clear.

There is a fairly deep leveling system, with three trees of combat that can be combined, then further enhanced by selecting Destiny cards. Combat is fluid, combo-based, and allows you to mix and match primary and secondary weapon attacks, magic spells, blocking, and dodging on the fly. There is a stealth system with takedowns. There's crafting, resource gathering, a deep random loot mechanic, pickpocketing, speech checks, lockpicking, and a gigantic world with tons of nooks and crannies to explore.

The meat of the game is the combination of all these systems in the sort of pure action-rpg that doesn't come along all that often. Most games in this genre attempt to put a twist on the formula, creating obstacles between the player and his or her enjoyment of the core mechanics. This game just gives you more to tinker with. Its dumbest aspects are either unobtrusive, funny, or easily skippable.

None of that is obvious from the first ten minutes of the demo. The game takes a long time to shake your hand as a puddle forms at its feet, and it still genuinely likes Stargate SG-1, but if you have a few minutes to spare it might not be a bad idea to dig a little deeper.

Dustforce
Finally, someone made the game that I envisioned the first time I saw Minesweeper in the Windows 3.1 menu. 7/10