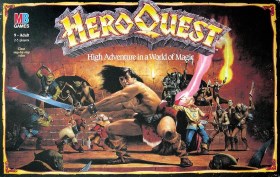 Until recently, the last board game I touched was a dungeon crawler called HeroQuest, in the late 90s. Back then I was a young idiot. Now I am an older, far wiser idiot.

In this new series I'll be checking out all the interesting board games that have come out while I wasted my life with other things, like playing video games and writing humor in the hopes of earning a living wage. As it turns out, board games are currently in something of a golden age.

There's so much creativity out there that we're spoiled for choice. Want a board game with lots of dice and cool miniatures, or no dice and simple wooden stick figures? Want a card game that's also a persistent RPG or a simple card-based game about spies or love letters? Want a large-scale space battle commander game with collectible ships, or a similar self-contained game featuring birds and mice warrior pilots? Well, whatever your choice, you'll probably buy everything, then build a gaming table and cover an entire room in shelves to store all these big dumb boxes.

Today I'm looking at Arcadia Quest. It takes place in a fantasy world where screaming humans ruined everything. Not sure where the fantasy element of that premise comes into play, but there you go. 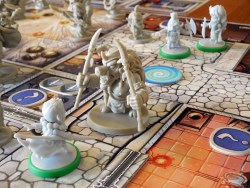 Arcadia Quest is a co-operative game where you create a guild of three heroes with unique abilities then shove them into a meat grinder of enemies, bear traps, and treachery. Each scenario takes place on its own map with a bit of backstory and a set of quests. The first guild to complete a quest gets a reward (often gold but sometimes a unique item) and the first guild to complete a set number of quests wins the scenario. After each game players spend their gold on new equipment, then choose from a pool of maps to play next. The campaign wraps up with a sixth game which is a showdown with the main villain.

The emphasis on competitive co-op lends an air of tension and uncertainty to an already satisfying dungeon crawler. There's no need for a dungeon master. The bad guys are spawned in set locations, and are activated like traps. Slobbering, skull-collecting traps with enormous teeth. More interestingly, your guilds can benefit from working together as much as they can benefit from whacking each other's heads with magic axes.

At any point you can attack one another. Killing a hero nets you the treasure they're holding as well as a gold bonus. There's also a "kill one jerk from the other guild" quest. If, however, you enter a temporary truce you can team up against the monsters to clear a path and scoop up all the map's treasure, then race one another to finish the last objective. Of course, nothing prevents one of you from breaking this truce at the best/worst possible time.

Oh, there's something uniquely satisfying about the dice rolling mechanic. When attacking you roll a number of dice determined by your character and their equipment. There's a bow (a hit when using a ranged weapon or whiff when using a melee one), a sword (see above), and a crit. A crit is always a success regardless of the weapon you're using. But it's more than that. Each crit you roll allows you to roll an extra die. If that one's a crit, you get to roll another die. And so on. This leads to occasional situations where you kill someone with so much unnecessarily force that you run out of dice.

But heroes and certain monsters also get to roll defense dice. Those have a blank side (whiff), a shield (negating one of your attacker's hits), and a crit. So if your opponent is looking smug after rolling a string of six hits against you, there's a chance you can roll a ridiculous combo to block every attack and absorb their smugness.

Would I recommend the game? Well, you need to understand that it does not include a skeleton. The skeleton - ideally a plastic miniature - is a vital part of what I believe fantasy board games should aspire to be. There are troll chefs, orcs, goblins, beastmen with enormous hammers of cracked stone, succubi, and a vampire. But no skeletons.

Yes, I had a ton of fun every time I sat down with Arcadia Quest, from the first hesitant session learning the rules and setting everything up to the finale of my second campaign. And sure, I found myself thinking about the game in between scenarios, working out gear distribution and guild rosters.

But still. No skeletons. Thankfully, there's an expansion called Beyond The Grave. It's got a new campaign, heroes, board tiles, and loot cards, but most importantly it has skeletons. Several plastic skeletons, of varying sizes. Including the most prized of all skeleton varieties, the skeleton holding a shield. 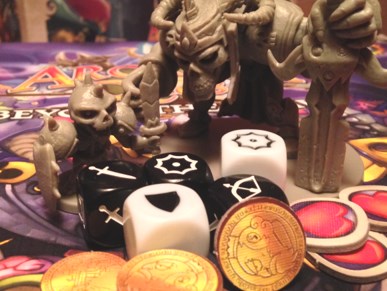 Therefore I recommend that you buy the base game as well as the skeleton expansion.