As this series continues, it should become increasingly obvious that there are many things I have not done and do not know. I'd go so far as to say that I'm a leading expert in the field of not knowing or doing things.

Among the many things I have not done is play a tabletop RPG. I have neither dungeoned nor dragoned. Some of my favorite video games are computer RPGs, but I've never sat down with a group of people and had a dungeon master describe the ruins of an ancient elven strip mall. It's not that I don't want to. I've just never had willing friends and I'm too lazy to join a group at my local comic shop.

Luckily for me, the Pathfinder Adventure Card Game sets out to evoke the feeling of a tabletop RPG. It's got character sheets you can print out. It has dice with unusual numbers of sides, so rolling takes less time than interpreting the result. There are traps to overcome, locations to explore, stat checks, and quests to complete. It also passes my skeleton test: 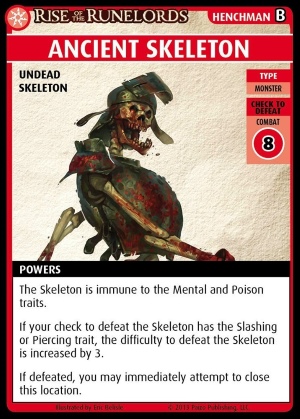 Okay, it's not a plastic skeleton. But it will do.

However, the Pathfinder Adventure Card Game is not a tabletop RPG. It's a card-based game, which might come as a surprise if you skimmed past its title. Hey, guess what? I've never played a card game more complicated than Uno. 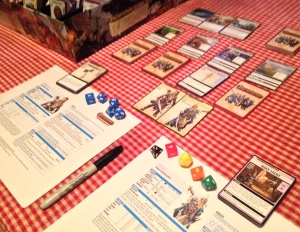 Heads up: A tacky checkerboard tablecloth is required, but not included in the box.You start off by picking a character and building a deck that matches their class requirements. For example if you're a cleric you'll need to grab a few pieces of itchy armor, some crumbling weapons, a few spells that make the enemy hurt you more efficiently, an ally who kneels behind your knees when you get pushed backwards, a magic potion that makes you forget you just drank a potion, and a bunch of blessings that render you completely immune to all forms of healing.

Well, maybe your beginning deck isn't that shitty, but it is pretty basic. As you play, you'll come across new cards to replace the old ones and earn abilities that change how your character plays. There are plenty of ways to grow your character.

And you'll have plenty of opportunities to do so. The game is structured as one overarching campaign (called an Adventure Path), made up of many adventures, each further broken up into quest-y scenarios which take around an hour to complete. Since your character and the stuff they've accumulated carries over from game to game, the sense of persistence is as tangible as a Bag of Tangibility. But how does the game itself play?

The scenario gives you a bit of flavor text introducing a villain as well as several locations where that villain might be hiding. Your goal is to explore these locations (each represented by a deck of cards) until you corner and defeat the villain. Take too many turns to do so, and you fail. Use up all the cards in your character's deck, and you die for good. Encounter a Squirtle card, and you've made a serious mistake while sorting your game components.

As you work through a location, you'll come across traps and minor bad guys. You will also encounter really good items that you'll try to acquire by rolling dice to pass an appropriate stat check. So in a way, you want to explore as thoroughly as possible without taking so many turns that you lose the game. It's a nice balance.

Here's the thing. When you defeat the villain he'll run off to hide in another location if one is open, immediately closing off your current location deck. Which means you don't get to explore that place and find cool stuff. And since the villain is shuffled into location decks randomly, you might run into one on your very first turn, losing out on a number of opportunities to upgrade your Sharp-Handled Dull-Pointed Sword.

Look, frightened villagers, I'd really love to save you from these rampaging bandits. The thing is, I want to take my time and see if I can't find a magic crossbow or a gloriously armored standard bearer in your cupboard.

It's possible that I'd have more criticisms if I knew things about tabletop RPGs or other complex card games. But I don't, so I don't. Here's what the experience felt like for me, an idiot:

Read a bit of light quest/location/character lore. Roll some dice. Curse at myself for holding on to cards that would have let me roll more dice. Get new stuff. Beat the bad guy. Deck build between games. Organize cards (there are SO many cards in this box). Look at character sheets and agonize over what skills to pick up next, something I secretly love to do.

The Pathfinder Adventure Card Game is a fairly challenging fantasy exploration game that lets me fiddle with RPG-themed bits in my down time. The only way it could be more pleasing to my lizard brain is if it came with a cloth map.

Note: This update is based on the Rise of the Runelords base set. In addition to having a title that could also work as a Dethklok album, this set comes with several one-off scenarios and the first of six adventure packs that make up one big Adventure Path campaign.

Finishing the adventure path means buying five more adventure packs at around $12 each. I'm probably going to do this for two reasons. 1. Each adventure pack represents something like 6-10 hours of play even if I only run through them once. 2. I want to see how big the skeletons get.