Rockstar North would like to thank you for purchasing Grand Theft Auto IV and doing your incredibly small part in the global effort to put a billion dollars into our bank account. Your continued support might just put that Stealth Bomber we've had our eye on within reach. Our office's reception lobby will never be the same.

This patch addresses a number of issues in both the Xbox 360 and PS3 versions of Grand Theft Auto IV, improving the overall experience of your time in Liberty City. 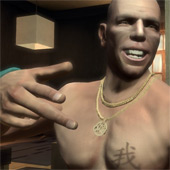 - Fixed a glitch that kept the rest of the game from appearing (bicycles, airplanes, parachutes, mission variety, and additional clothing stores)

- Performing a melee attack immediately after disengaging from the cover system no longer switches to a cinematic camera angle where an unseen chainsaw carves your enemy in half as blood splatters on the screen and someone shouts "Can't stop the Train, baby!"

Gameplay
- Tweaked melee combat so that instead of working 1% of the time, counters are now completely impossible

- Finally gave up on trying to model hands, replaced them with square blocks

Mass Effect
I already reviewed Mass Effect when it came out on the 360, but I'd like to use this opportunity to formally apologize for taking the easy way out with the title of this comic. 9/10

Great War Nations: The Spartans
In the war to flood the market with the most average games, Spartans have just overtaken gloomy shooters featuring macho squadmates. 5/10

Penny Arcade Adventures: On The Rain-Slick Precipice Of Darkness
Way better than most jaded forum nerds will be willing to give it credit for, even if it does open the door for a User Friendly kart racer. 7/10

Haze
And the gloomy shooters with macho squadmates regain the lead. 5/10

Echochrome
If M.C. Escher designed a video game, I guess he'd have to rip off Picasso. 7/10

Wii Ski
It may look as dated as Ski School, but it's about as enjoyable as Ski Patrol and as culturally significant as Ski School 2. 6/10

The Chronicles Of Narnia: Prince Caspian
It's not so good to be the prince. 3/10