Among the many contributions that Gamespot has made to comedy, its User Soapbox takes the cake.

The feature is a result of Gamespot's effort to conform to Web 2.0 standards, which dictate that all websites that must incorporate some form of user-created content that no one cares about aside from the people who create said content. Readers post overwrought pseudo-intellectual bullshit in their blogs, and the website selects a few entries to run on a tiny section of the front page which Gamespot would prefer to use as adspace for Axe Body Spray.

While these 14,000 word User Soapbox essays can be funny in their own way if you are stout enough to ward off comas, their titles say more than enough. 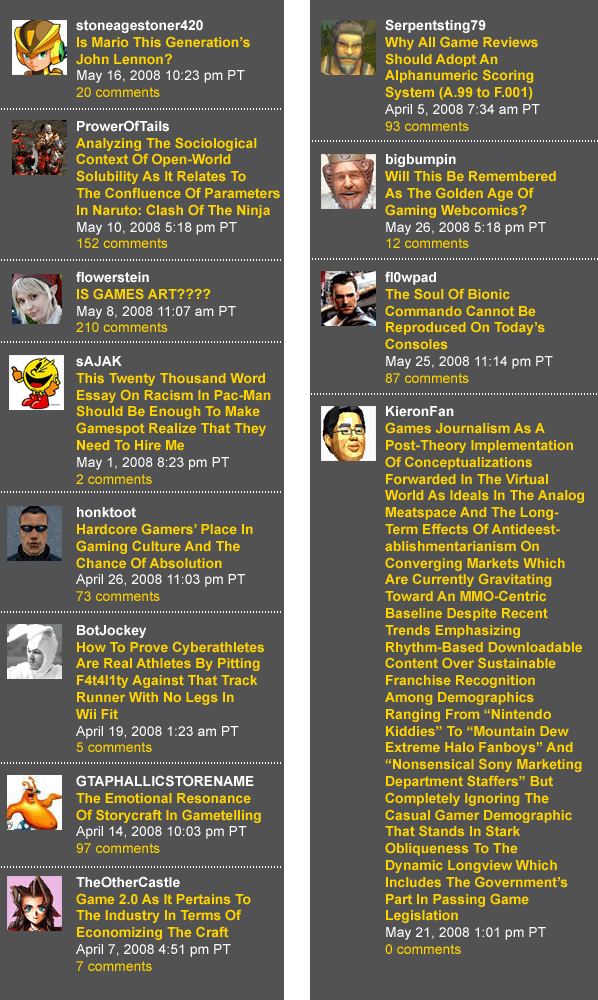 Sherlock Holmes: Nemesis
It's a good thing Sherlock Holmes is on the case, since he's pretty much the only person who could find an audience for adventure games (even really good ones) in 2008. 7/10

Iron Man
Just as Robert Downey Jr. was born to play Tony Stark, you were born to not buy this game. 4/10

Wii Fit
I already lost 40 pounds by throwing away my 40 pound dumbbell set since I won't need it anymore, this is great! 8/10

Emergency Mayhem
The emergency: Nintendo is slapping its seal of approval on every third-party minigame collection that comes its way. 1/10

Boom Blox
Thanks to Steven Spielberg's involvement, I can safely describe this as Jenga meets Munich. 7/10

Barnyard Blast: Swine Of The Night
Not since Tomba has pigkind been so horribly misrepresented. 5/10