Welcome to the open beta for Age Of Conan: Hyborian Adventures, the MMO that brings Robert E. Howard's vision to life! New players may wish to jump right into the game, but those of you who took part in the closed beta may wish to familiarize yourself with the changes that have been made in preparation for this open beta. 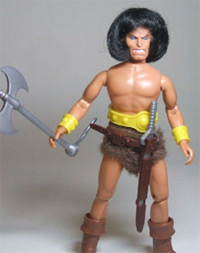 Quests
* The quest "Kill Some Things" now concludes after you have killed some things, not before.

Player Character
* Fixed the beard that appeared on female characters during character creation. The beard should now be fuller and match the color of your character's hair.
* Muscles now bulge and flex appropriately when tickled.

Classes
Assassin
* After hiding, you can not move until another player finds and tags you.

Barbarian
* Creating a Cimmerian barbarian with black hair and a name like Conann will replace the single player portion of the game with a sceen that reads "You are a douchebag".

Bear Shaman
* Although this change was crucial to make the game balanced, it goes against the lore and is sure to be controversial. Instead of limiting the ability to wooded areas, Bear Shaman can now shit pretty much anywhere.

Dark Templar
* The amount of life you drain from enemies is now calculated by how hot your enemy is on a scale from 1 to 10, with 10 being like, Adriana Lima or something.

Guardian
* Shields can no longer be thrown, then caught up to and sat upon in midair until level 40, when other mounts become available.

Audio
* Disabled the "La Cucaracha" car horn that blared when players pressed the H key.
* Lowered the volume of all dialogue recorded by Gilbert Gottfried.

NPCs
* Gronmak no longer patrols his hut with a swimming animation.
* Fixed a bug which caused an extra set of eyelids to slide over Blandau the Wicked's nipples when he blinked.
* Storbo the weaponsmith now accepts the same currency as all other merchants. In related news, removed the "cupped hands" animation for player characters.

Mobs
* Crocodiles no longer float into the air and out of your reach when they are low on health.
* Added extra limbs and heads to all creatures to increase the level of dismemberment.
* Some inhuman mobs have been given all the powers of our Game Masters. Be careful out there or you might have your account closed!

Stranger
Setting out to create something that's strange just for the sake of being strange can sometimes result in something as captivating and artistically valid as Zombie Strippers. 3/10

Grand Theft Auto IV
Rockstar delivers the best Grand Theft Auto to date and retains their reputation as mavericks by refusing to cave in to the killjoys that called for mission checkpoints and controls that are more fun than aggravating. 9/10

NBA Ballers: Chosen One
Fans of Final Fantasy summons will love the "press a button, then wait for an hour until the canned animation is done so you can actually control your player again" gameplay. 4/10

Gran Turismo 5 Prologue
Making PS3 owners pay $40 for a glorified demo is the video game equivalent of charging disaster survivors for tap water, then punching them in the neck. 0/10

Mario Kart Wii
Thanks, see you again a year into the lifespan of the next Nintendo console / handheld! 8/10

Battle Of The Bands
Likely to be the source of more wrist injuries than fun, but this "music-based rhythm game" is a genre that might just have some potential! 4/10

The World Ends With You
The best thing Square has done since they made the decision to pass on a fourth SaGa Frontier game. 8/10

Teenage Zombies: Invasion Of The Brain Thingys
Ten points for the cool title, minus five for disappointing thingys. 5/10