Superheroes are tricky. They seem like a natural fit for video games, but the combination has rarely turned out well.

A character's most interesting qualities have to be considered. You can't just drop a superhero into a clone of a popular game and hope for the best. Well, you can. You can make a lot of money with that, actually. It doesn't necessarily mean the game will be good, though. 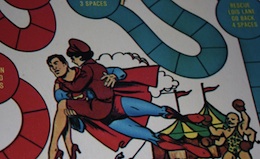 Rocksteady's recent Batman games work because he's a regular dude that could take on crowds of bad guys without necessarily being invincible, and because gadgets are an extension of his "have a plan and a tool for everything" approach to fighting crime. Spider-Man open world games work because the character is extremely agile and mobile, swinging across wide distances rather than slugging it out in corridors and solving puzzles.

Superman games have never worked. At best they have been middling, and at their worst they have been legendarily abysmal. A lot of this can be blamed on terrible design and low effort cash-in attempts, but some of it can be chalked up to the fact that it's difficult to make Superman interesting.

Most of my life is spent designing games that I will never actually make, with no real knowledge of how difficult the development process can be. I have a perfect track record. It's pretty amazing. Having spent some time working on a perfect Superman game, these are the ideas I've come up with. Most of them are pretty bad. Hopefully you'll like a few.

Problem: Superman is too powerful.

Terrible Solution: Take all of his powers away and put him in a third person cover-based shooter with modern guns. Make sure the environment is totally gritty and realistic.

Terrible Solution: Give Superman all of his powers, but make him really hard to control. Also, all the enemies can be really really fast and super tiny.

Terrible Solution: Make all the bad guys equally powerful for no reason at all. Put them in special technology suits that render them immune to everything. This way the player has to punch them about eighty times each. Also, give them some sort of energy weapon that knocks Superman on the ground and holds him in a stun animation for several seconds.

Possibly Decent Solution: Embrace his power, framing amazing sequences of action with the real challenge: Deciding how to end a situation in as few "moves" as possible. No timer (timers are terrible), just pause the game as the player surveys the situation, then tags the key elements in the order that they will be tackled. Rather than levels, make a ton of these situations (hostages, bank robberies, out of control vehicles) with clearly defined goals. Basically, make it a sim with bouts of action where you essentially play as a god.

Terrible Solution: Arbitrary "Game Over" conditions such as Superman being spotted while stealthing, or drowning when he touches water.

Terrible Solution: Everyone has Kryptonite weapons and also Superman just ate a whole Krytonite cheesecake at the Kryptonite Cheesecake Factory.

Terrible Solution: A bomb around Jimmy's neck will go off is Superman gets hit three times.

Possibly Decent Solution: Superman's primary concern isn't death, but the burden of responsibility. Dealing with a day's emergencies efficiently gives him a sequence as Clark Kent, engaging in relatively offbeat and rewarding activities such as going on assignments with Lois. Handling emergencies poorly leaves you less time to do these things, and the results are reflected in the Daily Planet. Maybe have an endgame that plays out differently if you save enough people.

Problem: Superman is sort of a boring character.

Terrible Solution: Superman tosses out snarky quips left and right. Mix it up with some cursing. A lot of his dialog can be snotty observations on things that happened in popular video games.

Terrible Solution: Superman interacts with someone over an earpiece. They can update Superman on things that are happening, and can compensate for his blank personality by being an awkward computer geek or a bizarrely angry hardass. This would also provide plenty of opportunities to use military jargon, which people seem to think is really cool.

Terrible Solution: Have a LOT of cutscenes where Superman tries not to fall into a life of crime. Basically, take the worst parts of GTA, including strange arm movements with hands that never move from their default G.I. Joe grip.

Possibly Decent Solution: Give the enemies, victims, and supporting cast room to shine. Make Metropolis a vibrant character in its own right. Play into the fact that Superman tries to appear flawed while he's Clark Kent - not just by making him clumsy, but by stressing the fact that you're an incorruptible alien pretending to fit in with humans you don't really understand. If all else fails, make the game party-based with lots of ambient dialog between Bizarro and Krypto.

Serious Sam: BFE
Eventually this turns into the sort of shooter you hoped for, but it takes way too long to get there by lingering in a parody that makes things drab and unfun rather than genuinely funny. 6/10

WWE 12
All in all a somewhat decent game, which qualifies it as one of the greatest WWE titles of all time. 7/10

Fishing Resort
That's right, now that Zelda has arrived it's back to this shit until the Wii U comes out. 3/10