Standing at a podium in a large conference room, his hands neatly folded before him, Bruce Willis patiently waits. The seats before him - once filled with virtual members of actual press outlets who had hailed Second Life as a blazing beacon of the future of human interaction and business - sit unoccupied. 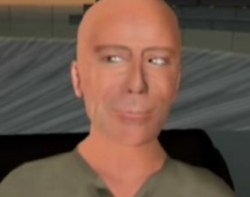 He decides that if he ever gets out of here, he's going to have a talk with his agent.

"Come out to the computer," he quips, "we'll get together, have a few laughs."

"What?" asks a man on the other end of the conference room, at a podium of his own, waiting for a press conference of his own. The official spokesperson of the Beijing 2008 Olympic Games leans forward and repeats his inquiry.

With a groan, Bruce Willis turns his head to the side and pretends to be very interested in another corner of the otherwise empty room.

Once, the slapshod buildings below had swarmed with the depraved sexual antics of hundreds of avatars. Centaurs had literally been ridden in the dungeons below, their cries muffled by ball gags which had cost just ten thousand lindens. Perfect bodies had disrobed perfect clothes and violated one another as their perfect hair stayed in place. Dozens of dancers had entertained clients while AFK, taking a break from the game to blog about their virtual days.

Now, there is no activity. There is only the hermaphrodite, idly contemplating a face change. Her current face is striking in that generic, vaguely doll-like way that renders one more bland than genuinely alluring. She needs one that's even more tanned, big-eyed, and devoid of personality. If only someone was still making faces.

Once there were open aired plazas in the mountains. You could see them standing in the amber sunrise where the white edges of their pedestals stood in the flow of shoppers. Polished and sturdy and proud. On their backs were bicycles and beards for sale that were maps of the world in its becoming. Of a thing which could not be put back. Not be made right again. In the deep glens where they lived all things were newer than chatrooms and they hummed of the future.

Star Wars: The Old Republic
Layers of story frame your character's actions in context to make you feel like you're playing a role, making this is no more of a World Of Warcraft clone than Half-Life was a Doom clone - even if the mechanics are largely similar due to both games existing in the same sub-genre that existed long before WoW. 9/10

Winter Stars
If you're going to churn out yet another collection of terrible sports mini games for the Kinect and put the word "stars" in your title, you could at least put forth the bare minimum amount of effort to license a few snowboarders or bungee skiiers or heli-tobagganers. 3/10

NCIS
All the pulse-pounding excitement of avoiding the show, ruined by this turd of a hand-holding pixel hunting game stuffed to the brim with QTEs. 1/10