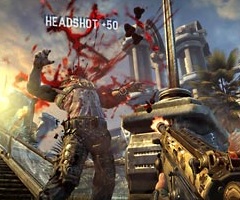 This day-of-release patch brings Bulletstorm to version 1.0.1, addressing a number of issues that popped up at the last minute and introducing some fun new features.

Thanks to our customers for supporting this game, especially the PC gamers that paid $10 more than the platform's average title in exchange for being mocked if they complained about not getting a demo, then being told that they were lucky to have anything at all since they're probably pirates.

On to the changes!

Dungeons
With graphics that have less personality and gameplay that's far less engaging, it's appropriate that the game's title is half of Dungeon Keeper with an unnecessary addition. 4/10

Stacking
Marry me, Double Fine, and while we're on our honeymoon every adventure game developer should sneak into your bathroom and steal the "encourage players to find multiple solutions to every puzzle" concept, because the bathroom is where you keep that. 8/10

Marvel Vs. Capcom 3: Fate Of Two Worlds
I have no idea what's going on and spend most of my time being chain-punched into the stratosphere, but I like it. 7/10

Body And Brain Connection
The brain is part of the body, game, and now I have defeated your test. 5/10

You Don't Know Jack
Easily the funniest quiz game to come along since Hollywood Squares. 8/10

Test Drive Unlimited 2
Because when I think of driving games, I think of terrible Rockstar-like cutscenes presented in the douchey style of Playstation Home. 6/10