I'm going to talk about Firewatch today, but to be honest I'm a little distracted. I lost my twenty-sided die. I'm positive that I didn't drop it in the mysterious cave. It's possible that it jumped out of my pocket while I was stomping out the teens' campfire. Most likely, however, it fell when I was rolling it on the outer walkway of my watchtower - as one does - and an unexpected sound distracted me.

I already checked the grass around the tower's base for the die. That led to the discovery of something surprising hidden behind the outhouse, which in turn led to a conversation with Delilah about bad puns. But no twenty-sided die.

Keep an eye out for me, will you? Thanks. 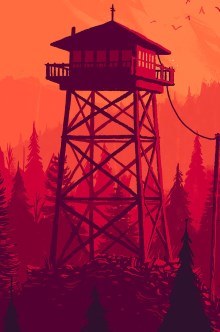 Firewatch has exploration and all sorts of items to interact with, but it's not an open world or survival game. There's branching dialog and more character work in its first half hour than in the entirety of any game in recent memory, but you mostly talk to one person on the other end of a walkie-talkie. Traversal and Metroid-like map progression are prominent, but you're a chubby guy pushing 40 who grunts while stepping over a log.

So what is Firewatch, exactly? It's a series of Real Good conversations that pull you into the orbit of one of these elements for just the right amount of time before flinging you off to the next thing. As you hurtle between the two, you find yourself thinking "I can't wait to go back and see what else can be done" or "I'm going to pick up every piece of litter plus all the pine cones".

You poke around your tower. The conversation nudges you outside to explore. You get a bit lost and hold your map up in front of your face while walking directly into a tree. Something is said that reveals a bit about your character. Hurrying back as darkness falls, you pass several places that seem worth a visit later. Before you settle in for the night, something rattles you, making you re-evaluate your situation.

Firewatch is a constant shifting of your expectations. Just when you think you understand the scope of any given part of the game (from the story to the world to the things you can do within it) that element moves in an unexpected way, leaving you off balance. Since the game goes so far to get you invested, you find yourself having surprisingly strong reactions to very normal problems. You're a vulnerable human navigating a place, relationship, and mystery that you can never fully understand. That's awesome.

I get the impression that some people are wary of games like this. It feels like some games try to say something important without actually having anything of substance to say, like they focus on themselves at the expense of being enjoyable experiences.

That's not the case here. Firewatch is satisfying from the surprisingly structured beginning to the perfectly timed end. This game has a lot to say, and it does so with casual confidence.

I just wish it would say where my twenty-sided die wound up. I've got a great photograph planned, and it's the star of the show.

Firewatch
I forgot to mention you can look down and see your body, like Trespasser, which puts this in contention for 2016's game of the year. 9/10

XCOM 2
Now that Firaxis has opened the game up for modders, look forward to my "All Player Hit Chances Set To 0.0%" mega-mod. 8/10

Bombshell
Combines the clunky action of Space Siege with the everything terrible about Duke Nukem, minus Duke Nukem himself. 3/10

Mario & Luigi: Paper Jam
A return to form for the series after the disappointing Dream Team, but for the record paper jam tastes absolutely terrible. 7/10