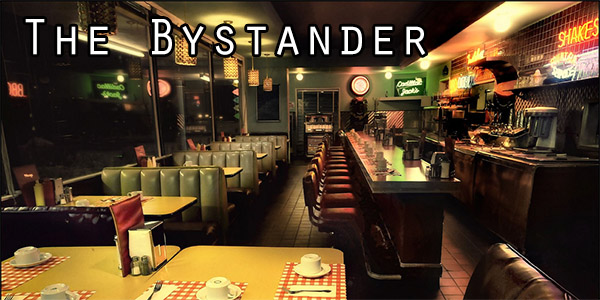 The day breaks. My mouth is dry, and my bones emit a silent scream in unison. I have shut out the rest of the world for the past 72 hours, neglecting the needs of both my body and mind to work through yet another one of genius game designer Percy Grundle's devious mazes. A bedsore explodes on my lower back just as I wrap my mind around the latest solution, and I've never felt smarter.

Book me a trip to the moon, and I will bring a flag. It will have "GAMES ARE ART" printed on it, and then I will plant another, smaller flag next to it that reads "FINALLY." And it is all thanks to The Bystander. Somewhere on earth, the scattered ashes of Roger Ebert will reunite, if only to cry a single tear about the wrongest of opinions.

In case you missed the last nine years of glowing previews, The Bystander is the latest work of art by the inimitable Percy Grundle, who shocked the world in 2007 with his daring indie debut, Composting Simulator. Thanks to his strong distrust of outside opinions, Grundle has spent nearly an entire decade laboring away on The Bystander in his Portland studio apartment, only venturing as far as his mailbox to pick up the latest meal replacement calorie sludge from those innovators in Silicon Valley.

Perhaps the most brilliant thing about The Bystander is how everything happens for no apparent reason. A lesser game would provide some incentive, or even a few rewards along the way, but Grundle clearly wants to appeal to the sophisticates among us. From the minute you're dropped into The Bystander's labyrinthian diner setting--with each individual chair, table, and wad of gum painstakingly modeled by Grundle himself--it isn't clear what you're supposed to do, or if you're even supposed to do anything. While a game made for the dull masses would have you making measurable progress by the three-hour mark, it was at this point my wandering brought me to The Bystander's first puzzle--making the next five hours I spent working on it more meaningful than even the birth of my daughter.

While the uneducated may view The Bystander as containing nothing more than children's mazes, there are actually rich allegories buried within their seemingly simple forms. One where you're tasked with helping a Hamburgler-esque figure find a path to a hamburger, for instance, cleverly evokes the malnutrition issue facing America's poorest citizens. And Grundle isn't afraid to get political, either. One puzzle asks players to work themselves through the innards of a jet plane in a method that bears a striking resemblance to the actual plans of the 9/11 hijackers--communicating America's darkest day via the visual grammar of what you'd find in an activity book. Not since BioShock's Ken Levine told us both sides are actually bad have we encountered a game designer willing to say the things we're all thinking.

As finishing each puzzle simply opens up dozens more, the ignorant may be scratching their unwashed heads and muttering, "What's the point?" While Grundle believes rewards and enjoyment are anathema to good game design, every 80 finished puzzles unlocks an in-game audio log that, when activated, dispenses a quote from some of Grundle's favorite literature. I'm not sure if these passages have anything to do with the game itself, but that's not for me to decide. I could only pause my Neil Degrasse-Tyson audiobook and bask in quiet awe at a person who's clearly much smarter than me.

If you wanted to know what I really thought about The Bystander, I would ask you to teleport me 1000 years into the future, as the English language may have spawned words of praise worthy enough by this point in time. But for now, I am at a loss for words--words that Grundle must know, given his sheer genius. He would never stoop to talk to me, but if he did, I would thank him for teaching me things should not be done for enjoyment, or even a reason. As my former wife packs up her belongings, I realize our relationship was nothing more than a distasteful means to an end. I now have The Bystander, and that is all I will ever need.