CamWhores, submitted by Stile. Cam girls are one of the most pathetic creatures on the Internet. If they weren't so actively pursuing their own degradation and ridiculous materialism, and weren't encouraged by the drooling hordes of men who worship them, I might take the time to feel sorry for them. Stile, the brains behind camwhores.com, I have at least a small amount of respect for. He's an affable pornographer who makes no secret of the fact that he's doing what he's doing because it sells. His own personal site is a daily train wreck of the bizarre, a simplified and nihilistic FARK that caters to the underground and the outsiders. Since it achieved incredible levels of success he has since branched out into other sites.

Camwhores.com is one of these sites, and it caters to the faux philosopher tit-slinging teenager and early twenty-something girls who, desperate for attention and affection, have resorted to prostituting themselves for money and gifts. At the same time he has created a seedy den of cat-calling for the men in the audience. Similarly desperate for affection, many of these men will send gifts or money to see these women naked. To feel like, if at least for a moment, this pair of breasts and a pensive smile on the other end of a webcam feels something approaching affection for them. 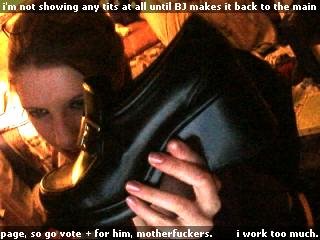 Join CamWhores now and get video feeds, full archives, no ads and more! Click here for TONS of FREE SAMPLES!
WEBMASTERS: Click here to make $BIG MONEY$ off of CamWhores! If you have a cam and want to make money, click here too!

Most of these self-proclaimed cam whores run personal blog style web sites that are similar to my update with roughly one billionth as much actually happening in their lives and roughly ten billion times as much vapid angst. Sometimes they'll go for the "deep and philosophical" or "artistic" approach, where they'll rant about the wrongs of society or scrawl their favorite anime characters using a Wacom tablet purchased for them with their filthy lucre. Never do they make even the slightest real tempt at entertaining beyond vomiting an idealized version of themselves onto the ephemeral fabric of the Internet. Like me, they just expect people to adore them based on the questionable gravity of their Internet celebrity status and their perky breasts.

If you put a burning trashcan on a pedestal it's still just a burning trashcan, and possibly a source of warmth for nearby hobos. Oh yeah, and we actually advertise this site here, but that's because we're whores too: whores for covering our bandwidth expenditures.