DARK FURR, submitted by Todd. I have been given to fighting with all manner of Rudos supreme in my time and I have to say that the fellows and ladies (if they are even able to being called that) featured on this computer book are taking the cake all the way to rudos capital city of Rudosoniopolis. They are people who are disguising themselves as the beasts of the burdens and the wild animals of the jungle to intimidate the opponents but they also say they are gothic and from beyond the graves of time! It is like if Mexican Bear (who is a real bear, not fake bear just for intimidation, I have bites to prove it) and Lord Vampiro (who is a real vampire according to the papers) are made to combine into one giant wrestler of madness. 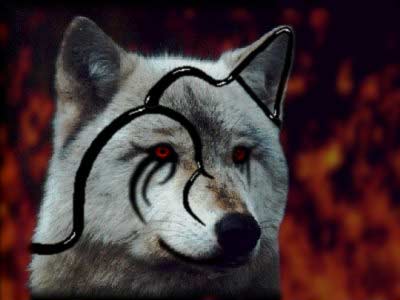 GOTH WOLF:
Species = Wolf (Lupus)
Description = A large Wolf with burning eyes of ruby red like the very fires of hell. Across his wild exserior curve lines of pure darkness, there meaning known only to him. This is as wild as southend gets.

No thank you friends! I am advising to steer clear of these fellows and to never book the matches in the square of the circle with them under any titles. It is not worth risking the curse upon the skull of the moon wolf I am thinking, whatever that is meaning, sheesh!