Monday, Feb 17, 2003 by Rich "Lowtax" Kyanka (@TwitterHasBannedAllMyAccountsEver)
The SA Forums are known for the vast, fertile, imaginative minds which populate it and lead threads into imaginative, wonderfully new creative territories. At least that's what it says on the press kit; I went in there the other day and found 20 e/n threads about breaking up with girlfriends and people shitting their pants, so what do I know? Regardless, the Photoshopping-frenzied forum folk picked up a clue from the famous Jerry Bruckenheimer movie "Fight Club" (yes, that was a joke, please don't send me flame email) and the well-known website airtoons, deciding to grab a copy of the easyJet flight instruction card, scan it in, and then take a few "creative liberties" with it. I'm using this term in the same sense that raping a college student would be considered "taking sexual liberties," of course. What came out of this horrible equation was a series of not-so-safe instruction guides detailing what to do when you encounter the unexpected on a flight. Unfortunately, most of these images were over 900 pixels wide, and anything over 500 pixels will break the page template, so I had to shrink them down considerably. Oh well, I guess that gives you more incentive than ever to get a forum account, silly!

altie demonstrates why you should never go for Plan B, particularly when the plane's engines are still running.

AznGamer counters the previous image with this terrorizing image! Those were the two shittiest plays on words I ever made! I'm so proud!

BerkerLurk demonstrates why the in-flight meal is preferred.

BloodDumpster doesn't expect Mr. Bond to Photoshop - HE EXPECTS HIM TO DIE!!! 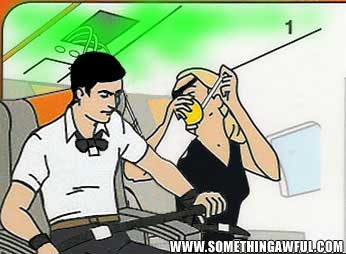 Cynyc demonstrates the downfall of providing a free Midget Suit.

Deaper takes a few liberties, both sexually and otherwise, for some hot and spicy inter-panel action! 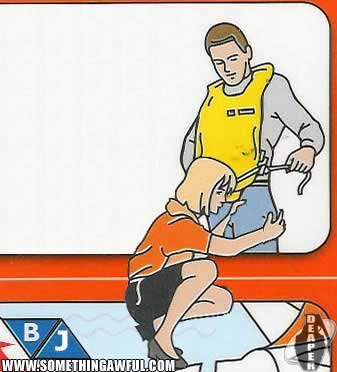