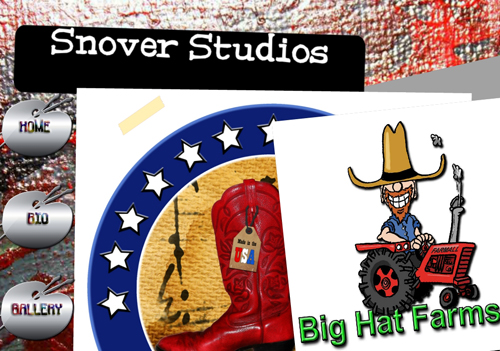 Snover Studios (warning: autoplaying music) is the online home of Paul Snover, a hyper-conservative Navy veteran turned political cartoonist. To showcase his work, Snover opted for a confoundingly awful Flash template from the early 2000s, complete with eerie, Halloweenish music and goofy sound effects that play when you hover over the menu buttons, all the true marks of a professional.

His wonderfully grotesque cartoons are like dispatches from a bonkers alternate world that only exists in e-mail forwards and comment sections. Just take a look at what's undoubtedly his magnum opus: 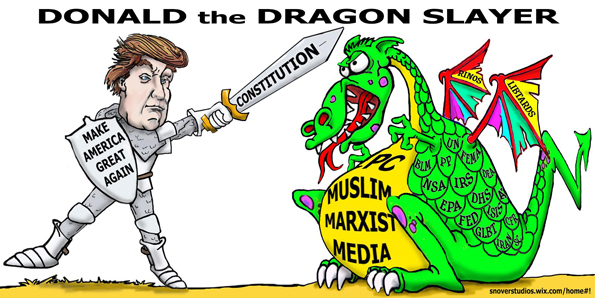 Yep, that's Donald Trump as a brave knight hovering over a field and wielding a sword representing the Constitution, about to slay a man-sized dragon representing everything from the "PC MUSLIM MARXIST MEDIA" to gay people to "libtards" to ISIS. Usually hack cartoonists just label a giant ape "DEBT" and call it a day, but this guy really goes the extra mile. Oh, and apparently he or one of his ardent fans liked this so much they blew it up into a mural for everyone to see. Not the first time either!

Snover's other political cartoons range from minor variations on "boy, taxes sure do suck, don't they??" to inscrutable local issues and, of course, racism. Then there are some straight-up bizarre gems, like Obama shooting the Twinkies mascot for some reason, Uncle Sam ogling a sexy anime babe version of Lady Liberty, and whatever's going on here with Batman and Ron Paul.

Lest you think Snover's a one-trick pony, check out his non-political work, like this weirdly sensuous strip about Frankenstein. Be sure to sample his poetry, too, like this vision he had of his hero, the guy who did Spy vs. Spy, getting stabbed by his own creations. An omen of things to come, perhaps?