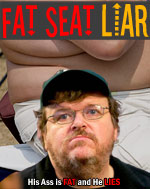 Tagline: You Could Feel His Fat Lies in Your Bones...Now Learn the Truth!

Plot Summary: A systematic debunking of all of Michael Moore's "facts" from "Back Seat Drivers" including a number of lies debunked with information not yet seen on conservative web (more) (view trailer)

User Comments: Just another mediocre right-wing hit-piece supporting the war mongering racist garbage that Bush and his fucking redneck bullshit supporters believe. Find out the real truth behind 9/11 and what happened at the Pentagon at www.loose- (more)

Cindy Sheehan: My baby died, my beautiful baby died, and president Bush and the Zionists won't even talk to me. To explain it to me. Again. All I'm asking is for him to let me scream at him and wail on camera.

Bill Clinton: [From an interview] Of course I wish I had done more to catch Osama Bin Laden, but to-
David Abercrombie: But he didn't. He didn't do anything at all...[Footage of planes hitting the World Trade Center] thanks liberals...