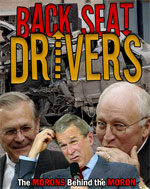 Tagline: The Shocking Truth Behind the Bush Administration's War on Terror.

Plot Summary: The real facts revealed about the Bush Administration. Who is in charge? Why did he lie us into war? What motivates the neocons? These questions and more answered in (more) (view trailer)

User Comments: Moore slings his left-wing lies and propaganda in this bunch of bullshit that amounts to a bunch of hippy homo faggot shit you can see why he's lying at www.michaelmooreliespedia.com and join the truth revolution at (more)

Michael Moore: Would you sign your son up to sit in an unarmored Humvee as it explodes?
Sen. Sam Brownback: Anything I say will make me look bad.
Michael Moore: Gotcha!

Reporter: What do you say to critics who point to recent US casualties as a sign the war is not going as planned?.
George W. Bush: It's windy out here, i can't understand what you're saying.
Michael Moore: See...