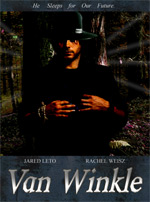 Tagline: Sleep while you can...the war has just begun.

Plot Summary: Professional monster hunter Rip Van Winkle disappears in the Catskill mountains while on the path to kill the bigfoot that killed his father. He awakens almost 200 years later in the midst of a secret supernatural war between bigfoots and (more) (view trailer)

User Comments: WHERE CAN U GET THE SOWRD HE HAS IN THIS MOVIE??? THE ELFLASYER IS WAY MORE BADASS THAN THE BLADE SWORD AND IT HAS THE BOOMERANG HANDLE WITH THE GUN BUT THE KNIVE AND SWORD PLACE DOESNT HAVE IT ANYBODY?????(more)