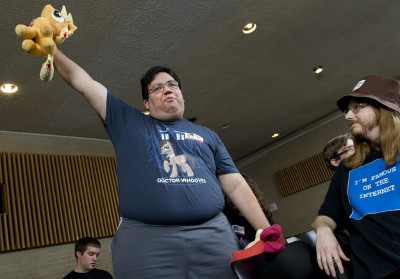 And there you have it. Bronydom. Any time any of your idiot friends talk about being a brony, tell them to go piss up a rope. There is absolutely nothing salvageable about what they do or who they are. They have taken a perfectly normal, innocent show for children and contorted it into a glorified masturbatory aid. Sure, with any internet subculture, there are bound to be a few weirdos. With bronydom, however, the weird is out front, in the open, and semi-acknowledged by the creator.

I would challenge any reader that considers themselves on the fringes of bronyism themselves to seriously reevaluate their lives. These aren't just a few idiots ruining it for the 99% of normal fans; these people ARE the "normal" fans. When even the best among them are redrawing children's show characters as large chested animu girls because they feel a slight twinge of guilt every time they jack off to a cartoon horse, you know something is irredeemably broken and rotten at the very core of your culture.

I usually make a joke here about how much this week's videos or whatever pained me. It's generally all in good fun (generally...) but something really bothered me about this week's topic on some fundamental level. Maybe it's because I dug into the material a bit too much rather than remaining detached and tossing out predictable jokes to videos other people had found. I suppose it doesn't help that I have young family members that watch My Little Pony as it was intended, but it actually made me physically uncomfortable and borderline ill to hear brony after brony after brony talking about "sweet pony ass" and how much they want to fuck Pinkie Pie and how much they love to "clop" to the "plot" and rape joke after rape joke after rape joke and scootabuse and... god dammit, fuck this shit. I'm out.

AwfulVision returns to it's regularly scheduled programming next time so submit whatever stupid-ass videos you want here or post them on our wall. Whatever. Fuck this world. I'm going to go do something more life affirming than watch grown men fap to animated horses; like maybe OD on heroin or something.

See you jerks next time!