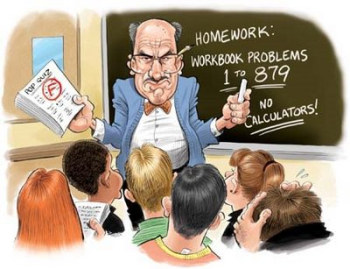 I hit college and took my intro Physics course. On the first day this Indian man came into the huge auditorium, 800 people in the seats, and his very first words were; "I COPYRIGHT MY LECTURES SO YOU MAY NOT AUDIOTAPE THEM." This was more stupid and hilarious in context since his "lectures" were him reading the textbook (which he did not write) verbatim. That was the class that taught me that it's okay to skip class in college.

My fourth grade teacher told the class that it was possible for someone to set their TV antennas up in a way that would give them the ability to view your home through your TV set. I was not able to undress in front of a TV until I was in my mid-20s because I just knew my neighbors were sitting in their living room, eating popcorn, and watching me disrobe.

My 12th grade Civics teacher firmly believed Hitler fled Germany and lived in Argentina until his death in the 1970s.

My fourth grade teacher described "G-Forces" as "Gorilla Forces", meaning for every G force number up or down is one more Gorilla sitting on your chest or leaving it.

"And another reason you shouldn't report suicides is because if it's untrue Catholic readers like myself will assume that the person who died is in Hell."

When I was in 5th grade, I got a failing report card. In the notes, it said,

"You need to put in more efford. Please schedule a meeting with me."

I had the shittiest English class this semester, English 205 from a Black Perspective. Could have been an awesome class but the professor was a fucking psycho who really honestly did not like ANY non-blacks. She told us black people are incapable of being racist, they can be prejudiced but never racist. She also told me that my opinions on racism were more or less irrelevant because, being white, I'm a brainwashed oppressor.

I am Hispanic. Yeah.

The school bell in my head is ringing right now because class is dismissed for another week. I want to leave an apple on the desk of every forum goon who contributed to this article. Since articles to do with school always become really popular I guess I should revisit this topic another time in the future. Or maybe I have jinxed myself with that comment and everyone will hate this article and I will be chased out of town by both irate teachers and furious internet comedy website readers. If I survive this horrible fate I'll be back next Tuesday with another Goldmine. If I don't return, thank my fellow Austin Powers fan club members for some 'shagadellic' times.