If was younger, smarter and less prone to arson, I would probably be starting back at school right about now. As millions head back to the classroom, it's important to remember that your teachers will lie to you and will go to any lengths they feel necessary to fail you and ruin your life. That's why it's always fun to see these high-and-mighty educators humiliated in public. Here are a selection of stupid comments made by teachers in the presence of our studious forum goons. 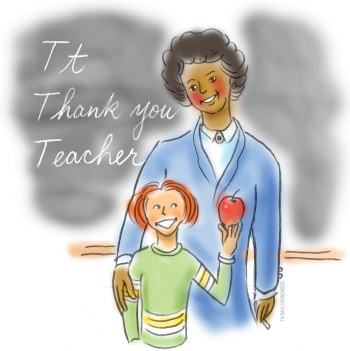 I really feel sorry for that man's wife.

Christopher Columbus was preceded, thousands of years earlier, by the builders of the tower of Babel, who built wooden submarines (they came up for air every once in a while) and fled to America to escape the wrath of God after their unsuccessful attempt at climbing to Heaven. No joke.

When I was nine or so a teacher claimed that an inflatable dinghy would be a good mode of transport on the moon. Really. He thought if you pulled out the air plug then you could propel yourself along on the escaping air. Fuck the laws of physics!

I went to a born-again Christian school as a child, so the list of shit they fed me could be written on 8x10 pieces of paper in ten-point font and stacked higher than my knees, but I'll dispense with the obvious Biblical shit, not because they're insulting, just because they're too damn obvious - and skip straight to some of the crazy:

-The Rolling Stones were popular because they had made a pact with Satan for popularity and fame. These were people who had never heard of Robert Johnson, mind you.

-The band name 'AC/DC' stands for, alternatively, "Angel Christ/Devil Child" or "After Christ/Devil Conquers", again, depending on which fuck you asked.

-Dungeons & Dragons was a Satanic game that encouraged witchcraft and collusion with demonic forces.

Dinosaurs are real and they live in Texas. She was 100% serious.

From my high school science teacher:

"You had a fever of 100 degrees? That's pretty bad, you know. That's the temperature where your blood actually boils."

My 7th grade science teacher was a wreck when she had to teach sex-ed, despite having taught for about 15 years. She mumbled through it, but some of what we caught involved fun facts like:

- Girls shouldn't use tampons. They can get stuck and require surgery to remove.

- Missionary sex is the only position that works, based on the curvature of our anatomies. You can end up in the hospital trying anything else.

- Everyone has sex with clothes on. Nudity is just used by Hollywood to sell movies.

We all agreed she was a virgin, or at least in a severe drought.